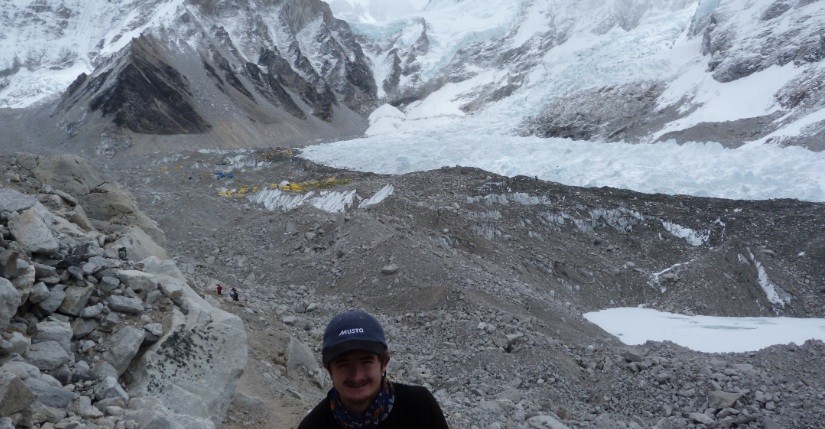 Sorry but it has been a bit of a struggle to get through an update due to poor reception since my last phone cast on 30th April. So I am able to update at 9.00 pm sitting snuggle in my tent.

Since 30th April I am pleased to say I have been all the way up to Camp 3 (7200m)and back. On 1st May Rob – our guide, Becky and I left from Base camp and went all the way up to Camp 2 (6500m) on this occasion missing out Camp 1. The climbing route from C1 to C2 is through the Western Cwm which is a flat gently rising glacial valley with huge crevasses located centrally. It is also caIled ‘Valley of Silence’ as the area generally cuts off wind from the climbing route. I felt pretty strong and at Camp 2 had a relatively good night’s sleep . On 2nd May we spent all day in the tent resting which is a good opportunity for reading and sleeping and eating. Unfortunately I had too much sleep and woke at 1.00 am which resorted to me having to play music on my ipod until 4 am in an effort to get off to sleep again.

On the 3rd May we climbed from Camp 2, also known as ABC (Advanced Base Camp)at the base of the Lhotse Face to Camp 3. This was an extremely hard day although I did feel strong after resting the previous day. The route to Camp 3 has been altered due to rock falls and the route now takes you to the far right had side of the Lhotse Face. At the start of the route the fixed ropes follow a very steep climb which would probably be equivalent to a Scottish Grade III. It is strenuous hauling yourself up the fixed ropes but eventually we crashed into some empty tents at Camp 3 and took advantage of time to have some snacks and drinks. It was also good to have some shelter from the obvious drop in temperature and constant howling wind.

Unfortunately we did not have great views as the weather came in and the decision was made to descend. At the base of the Lhotse Face we had a complete whiteout for about an hour and this made getting back to Camp 2 pretty difficult. Due to it being a new route, it was very hard to follow any path which also involved narrowly missing many crevasses on the way but fortunately we made it back to Camp 2 in one piece. (Don’t worry Mum!!)

Now that Camp 3 has been reached the acclimatization process is complete which great news. We now have to wait for the good weather window and this really is a waiting game as we plan patiently for our summit attempt.

On 4th May we had a late start, yep a lie in! and left at 9.20 am. We had a pleasant and uneventful trip down through the Khumbu Icefall and arrived at base camp for lunch. By this time it was really hot in the icefall as the weather started to turn for the better. Due to the heat of the sun during the day it made coming down the Khumbu Icefall quite difficult and strenuous as the sun bounces off the ice and snow .

Since being back at Base Camp the weather, pardon the pun, has been hot topic with approximately 400 climbers all waiting for a good weather window to attempt the summit. However, before all this can happen the ropes need to be fixed, firstly from Camp 3 to Camp 4 which is near the South Col (check this on your maps) and then from Camp 4 to the summit. The South Col is the death zone where typically a maximum of 2-3 dates only can be endured with the aid of oxygen in a bid for the summit. Until this happens no one can really hope to summit so it is a waiting game for the next 10/14 days when hopefully everyone can have their chance in a summit bid.

I checked the weather for 7 May and 5 days onwards but it looks unlikely that everything will be in place for us until maybe atleast 10 days time. This is frustrating but if we are patient and let nature happen then perhaps the weather will turn good for us.

So, at the moment we are taking full advantage of the rest days and today I had an awesome shower and tomorrow we plan to head down the valley and stay in a lodge. Communications should be much improved so I will try and send some pictures back for you all.

As always I would like to thank everyone for their ongoing support and as I near my attempt at the summit bid it would be great to push forward donations for Global Angels and if you are interested in donating please visit http://www.justgiving.com/matthewdthornton and as always you can follow my progress on www.matthewdthornton.com and via facebook.