After quietly reading through endless news articles on the Nepalese earthquake and subsequent avalanches which have occurred throughout the Himalayas, I have tried to take in the level of devastation which is widespread throughout the country. I am not in Nepal and so I have had to rely on news articles, climber reports and friends from previous expeditions in Nepal who are in contact with our Nepalese friends.

Selfishly I would not have plucked up the courage to write a piece about the events specifically on Everest had it not been for the sad news that two friends who work on Everest year in-year out have been killed by the avalanche which swept through Everest Base camp and higher up the mountain.

Sadly, this is not the first time I have written such an article as at the end of 2012, I felt the need to write a tribute to Dawa, the Sherpa I summited Baruntse with who sadly passed away on the 23rd September 2012 in the Manaslu avalanche. The climbing community, especially those who dwell at high altitude, are tightly knit, and it wasn’t until after the event that I found out another member of our team from Baruntse who was also working on Manaslu in 2012 narrowly avoided the same avalanche due to a team illness which prevented the team from ascending the mountain the same day the tragedy occurred.

In very simple terms, the earthquake caused an event which is unheard of in mountaineering. Everest base camp, whilst surrounded by very imposing peaks, is actually relatively safe due to its distance from avalanche prone slopes. All slopes around Everest base camp avalanche, however the snow and debris never troubles base camp due to this distance. To my knowledge (I am happy to be corrected) I don’t recall any Himalayan expedition suffering loss of life due to an avalanche reaching base camp. The whole point of base camp is that it is a place of safety for those returning off the mountain, free from the dangers faced above. Yet this year, around 18 people have been killed on Everest, many whilst at base camp. The earthquake simply caused such instability of snow and ice beyond which is usually seen at Everest that no prediction could have foreseen this freak event. 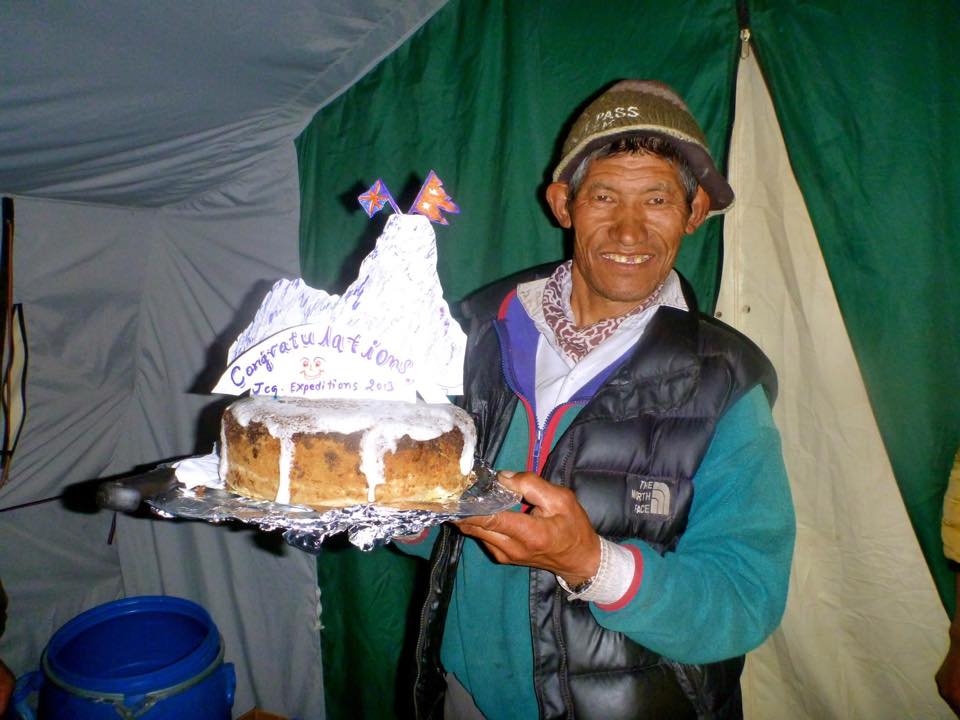 In that scene of total devastation, Pasang Temba & Kumar, two friends from my own Everest expedition in 2012 died. Pasang Temba was the famous Camp 2 cook who had poor hearing at best, but was equipped with every great trait the Sherpa people are known for. I often struggled to make camp 2, for me it was the hardest part of Everest when unaclimatised to high altitude, but Pasang Temba watched from afar each time I crawled up the path, and when close enough, would come and help with my pathetically light rucksack. 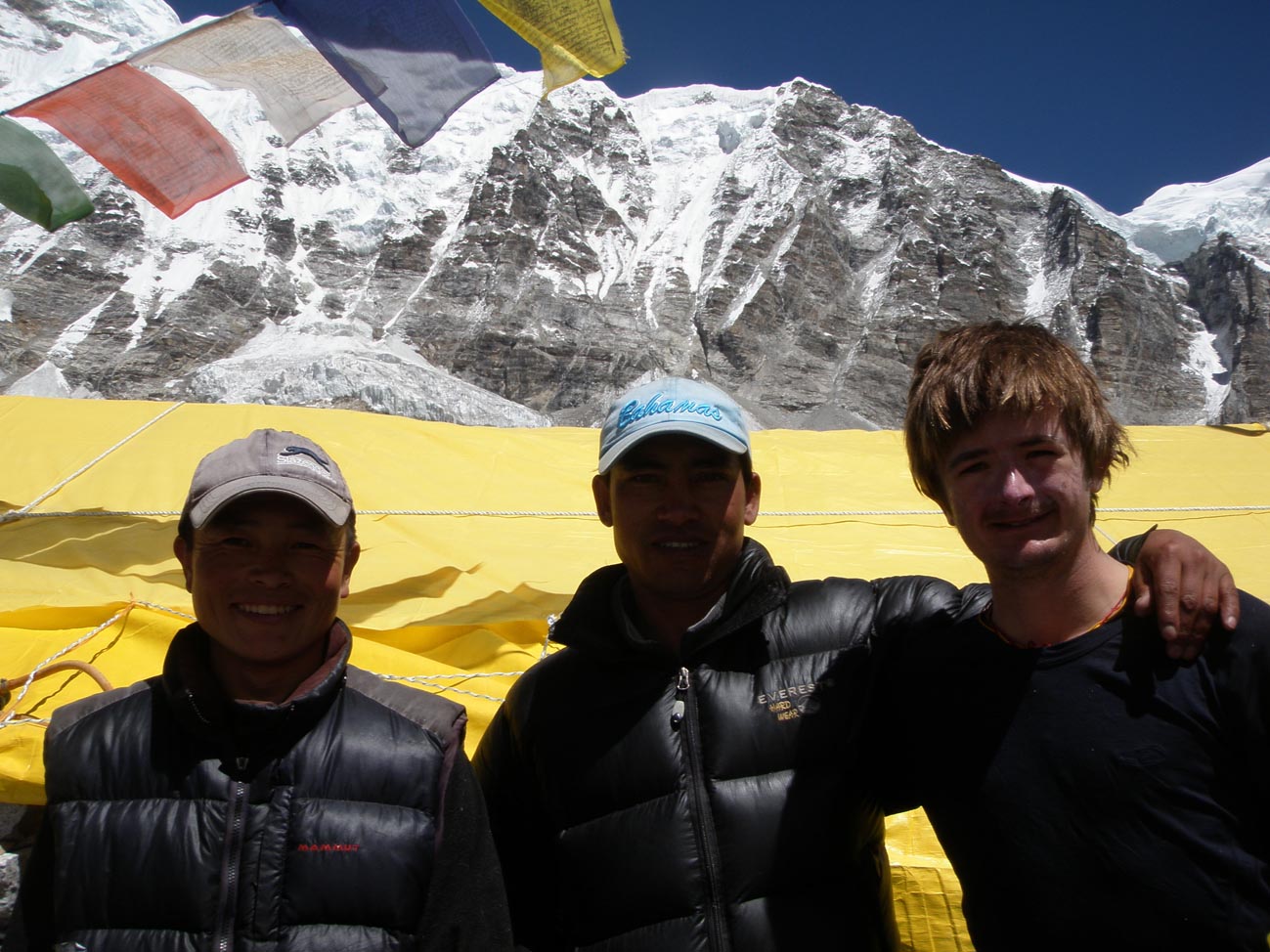 I didn’t see Pasang too many times whilst on Everest, but I saw Kumar (above, far left) nearly every day for 2 months. He was affectionately known as ‘Smiler’ which was either due to his ever present smile or his ability to bring a smile to everyone around him. I have powerful memories of Kumar as he was the first person I saw other than Chhewang Dorjee (my summit Sherpa) when back near base camp after our Everest summit. I remember stumbling down the icefall, over long wobbly ladders and under towering seracs, gradually getting closer and closer to the bottom, when all of a sudden we rounded a corner and saw Kumar standing there holding a bottle of Coke and a gigantic grin across his face. He had climbed into the icefall wearing trainers and with only a thin rope around his waist, yet had managed to cross some of the largest crevasses in the icefall; all to give us a drink.

They both leave behind children who will hopefully grow up to see the beauty in the area their fathers left behind, and who will equally get the chance to climb their mountains out of their love for climbing and not out of necessity.

For anyone who hasn’t climbed in the Himalayas, very unique bonds are formed with your Sherpa counterparts, they are your brothers who go with you through some of the most trying experiences you are likely to face. For that reason, I worry about my Everest Sherpa Chhewang Dorjee who doesn’t use social media as some Sherpas do, and is thus difficult to track down. Having received many messages from friends telling me plainly who has survived, who has been injured and who sadly didn’t make it, I am equally worried and relieved each time I don’t spot Chhewang’s name on the list.

I hope that it is plain to see the relationship formed between a western climber and their Sherpa counterpart. The bond is that of a close family member, and sadly the entire climbing community is once again grieving at its losses.

It is emotional writing about and seeing pictures of friends who have passed away whilst half way round the world, so I have no idea how difficult it must be for those at base camp, and the families who have now lost love ones. 2015 marks two very difficult years on Everest, but unlike the tragedy of 2014 where 16 Sherpas were killed on the mountain, this year, the 18 or so lost on Everest is but a drop in the ocean of over 5,000 dead and 8,000,000 affected and displaced (at the time of writing) across Nepal. Naturally Everest is very close to my heart and so my focus lies there, hoping for the lucky climbers to make a safe escape, yet I also have friends in Kathmandu and it is almost unthinkable to consider that the situation is actually worse there than on the mountain itself. Everest base camp which contains often between 600 and 1,000 climbers, Sherpas and porters was mostly destroyed, yet Kathmandu contains well over 700,000 people and has seen equal destruction. In comparable terms, this is equivalent of Leeds (a major UK city) being destroyed which subsequently affected the entire population of London (~8 million people). Anyone who has been to Kathmandu will know the difficulty facing the Nepalese. The city is usually run in ‘organised chaos’ and so putting a large scale earthquake in the middle of that chaos is a certain recipe for much suffering.

Whilst much of the focus is on Kathmandu and Everest, it is also important but equally difficult to consider the effects on communities around Nepal. Really the main hubs of Nepal are Kathmandu and the trekking circuits around the major peaks, but if you look at Google Maps, it’s clear to see how expansive Nepal really is and how isolated some communities really are. Muna a good example of an isolated community, most likely without the main forms of communications thanks to a lack of commercial expeditions to the area, yet close to the epicentre of the earthquake and so perhaps in need of aid.

This post isn’t about asking for help however. (If anyone is wanting to donate money to Nepal, it is very easy to do so through a number of easy to find charities, this being a good place to start: https://www.crowdrise.com/helpsherpashelpnepal).

Instead, I would like to use this page to remember Pasang and Kumar, two brave friends who lost their lives, I hope doing something they loved. Something I find easier when thinking about Kumar’s legendary smile.