It came as quite a shock to me when Ordnance Survey (OS) mailed the other week to say I was one of their #GetOutside ambassadors for the next couple of years. Whilst I would like to think I’ve walked enough country footpaths (I still hold the record for the fastest (mostly) foot powered return climb of Ben Alder), run up enough UK hills and flown back down them to justify the selection, I don’t particularly feel like an average outdoor-goer able to inspire walkers to get climbing, and climbers to get flying. But perhaps that’s exactly the point. For me, I feel like (to paraphrase the Weasley Twins) my skill set lies askew of the average rambler, in who’s domain, I don’t feel most comfortable (walking 100 miles doesn’t yet fall in my fun category). I do big mountains with small wings, that’s my forte. In fact, the same week I was told about my GetOutside inclusion, I was in the midst of launching my next big expedition; #RidingGiants, a project which I really hope is beyond the means of the average hill goer, if only because I’m finding it so difficult.

But then I sat and listened to the speeches at our recent OS GetOutside launch event, and I realised that the target person of GetOutside isn’t actually the average hill walker in the middle of the spectrum, they’re not even Mr/Mrs average who are yet to take up a sufficient amount of exercise. The target of GetOutside, in my mind at least, is actually an outlier, right at the far end of the activity scale. In a future post, I would like to talk a little about some OS online features which I’m now discovering make getting outside easier, but I’ll save that for another post. I think for now, it’s so important for me to explain the person at the wrong end of activity; why they are the focus of GetOutside, and why they are perpetually stuck at that end of the spectrum.

Ultimately, it boils down to 5 factors that the GetOutside programme can address (and I will address in the next article):

Before addressing point 1 in the next article, take a look at this continuum: 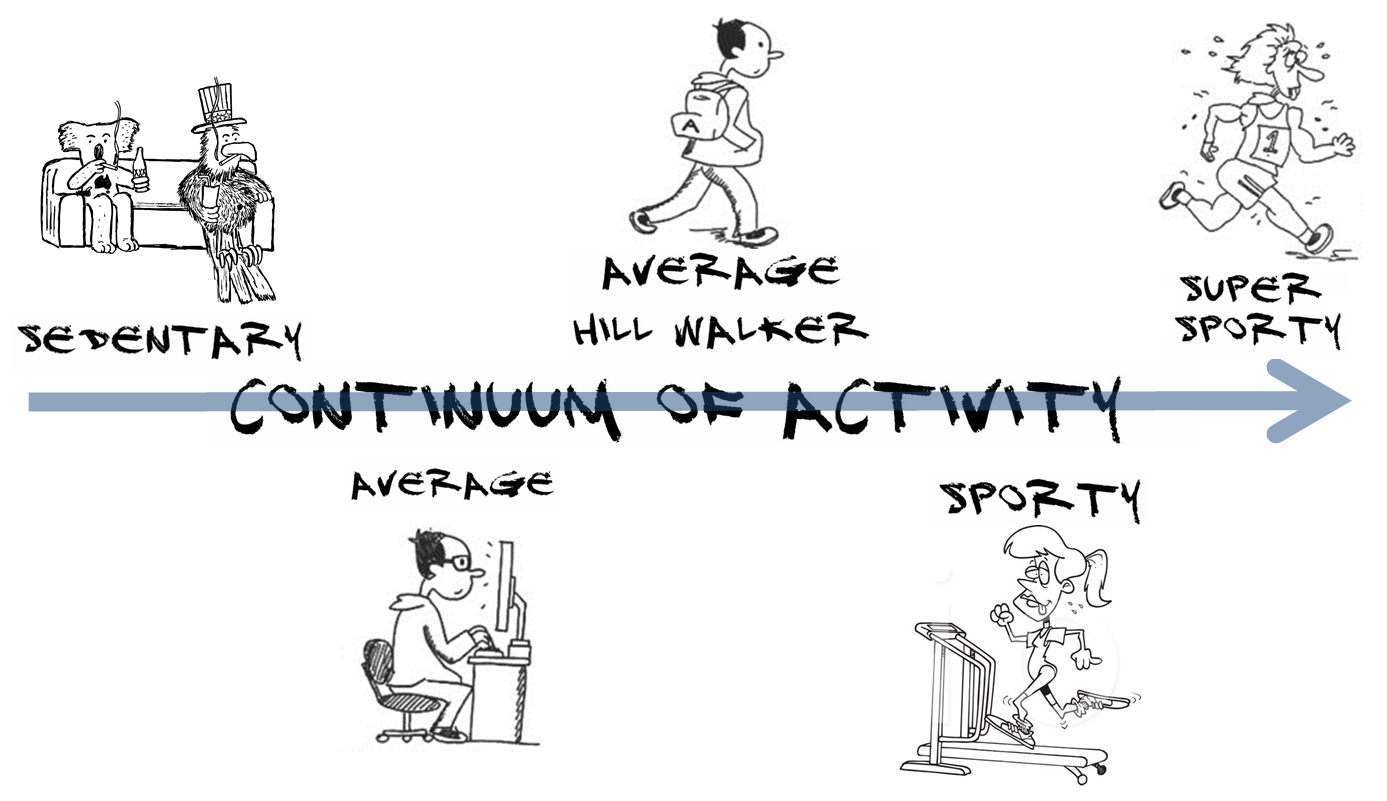 Firstly to clarify, the target group of people for GetOutside is NOT the active group from ‘average hill walker’ onward.

Secondly, what I want to highlight is that there is an often forgotten step between sedentary and an ‘average hill walker’/generic active person. That person is the average human, and they are the most difficult to define. Mr and Mrs average in the UK get little over 6 hours of sleep per night, eat only 3 servings of fruit/vegetables per day, drink less than half the recommended amount of water, and critically, undertake an average of only 1.5 sessions of exercise per week.

This is a poor assessment compared to many EU countries, however the key is that this group does undertake some exercise, which leads me to believe that if they wanted to get outside, they probably would (with a little encouragement). This group however is only the secondary target of GetOutside because sadly, there are more than 20 million people in the UK who are classed as physically inactive. Twenty million! Even more staggering, almost half (47%) of the adult population in the North West of England are sedentary.

The BHF 2017 Inactivity Report stated that the impact of physical inactivity and sedentary lifestyles is estimated to cost the economy £1.2 billion a year. To put that in perspective, this figure would allow the government to build over 17,000 new social homes, catering for an estimated 42,000 people; each year. As with many things on a national scale, the financial implications of inactivity are striking, and are the reason why programmes like GetOutside are just so important.

There was one figure however, quite different from the above, which drove me to write this article, and the one that follows. It concerns life expectancy, specifically that millennial children and generation z children (born 1995-2012) have a shorter life expectancy than their parents. This is the first time in modern history that such a trend has occurred, and to put this in perspective, life expectancy in Britain has fallen so much that a million years of life could disappear by 2058. The reasons for such a trend are multifarious, however much blame can be attributed to the increase in sedentary behaviour as technology and other factors enable more time to be spent physically inactive.

All these figures are truly staggering, however the underlying problems have, at least on the surface, simple fixes. Once simple mechanisms and a change of culture are brought about (no mean feat!), the rewards will be truly staggering, and have positive ramifications which reach far beyond the pretty white sandy shores of the UK.

In the next part of this article, I will be answering the five aforementioned factors which traditionally prevent people getting outside, particularly those from the sedentary population. In the meantime, please venture outside, do something active, and pay forward an act of kindness by taking along somebody who wouldn’t ordinary brave the outside elements.

Please click here for part two: Getting Outside, More!