After a rather long gap between the last blog post, and an extended rest following the completion of the Yell Diamond Jubilee Everest 2012 Expedition, I thought it the right time to write a quick blog on the expedition, and what is to follow on from here.

I’m not actually going to write a lengthy blog on the ins and outs of an expedition which, at around 70 days in length, had more than enough content to write a large J.K Rowling novel. There are 2 reasons for this; the first being that I haven’t quite been able to piece the whole expedition together in terms of the mental stress of being at over 8000m, and also the emotions of which I can’t quite yet explain. The second reason is I have a train to catch…

So what I can give you is mostly factual.
Starting with the walk-in which was as described, a walk-in, where I was ill numerous times and almost ended up on a long term rental contract with a tea house owner in Phakding.

On arrival at Base Camp, I was ill again as I waited for the arrival of our guide, Dr. Rob Casserley. So after 5 days of sleeping off an illness at Base Camp, Rob arrived and on the next day, we both had a quick foray into the ice fall which was made up of the craziest formations of ice I have ever seen. Imagine a blender full of ice cubes, all blended up for a few seconds, then increased in size millions of times, this is the chaos of the icefall.

After many, many day of climbing through this ice fall, climbing to camp 1 (which was promptly destroyed in an avalanche just 30 minutes after I had been resting there with the team), then to camp 2 and 3, with many rest days in between, including my birthday celebrated at 5,500m, it was time for the summit push.

This will be a very condensed version of events, which will give you just enough page turning motivation, without spoiling the best bits, to purchase my bestselling book which will be out later this month, at all good book shops including your local Poundland, published by… Any takers?!

The summit push consisted of a push from Pangboche where we had spent a few days resting, eating, sleeping and doing not much else, back to Base Camp. After a rest day, we pushed on to Camp 2 missing out the beloved Camp 1, again with another rest day. After this rest day, we had gained enough strength to make another concerted push to Camp 3, a camp on the Lhotse Face which had been destroyed the same morning by a falling wall of ice (Serac) which left one Sherpa with two broken legs, broken arms, and possible broken back, but was saved thanks again in part to our guide Rob. Rob had already saved another Sherpa who was buried in the avalanche at camp 1, and had the same unfortunate injuries except for the broken back, which was replaced with broken ribs, broken sternum, and lacerated tongue.

After a night at camp 3 where with my tent buddy Rick, we used supplemental oxygen for the first night, we were again ready for another push. This time we pushed on up to camp 4 on the South Col behind a group of 200 climbers, which had to be seen to be believed. Before leaving camp 3 however, I had the horror of seeing Rob going to the toilet, completely in the open. I later learned that both Becky and Mollie had to go to the toilet in front of 100 passing climbers who subsequently tried to get to Camp 4 as fast as possible. This was no easy feat for Rob or the Girls who had to negotiate an awkwardly positioned zip on the down suit, and the 100 person audience-induced stage fright.

After a long but successful push up to Camp 4, we were tired, but prepared to continue. We hadn’t slept since leaving Camp 3, but here we were at Camp 4, prepared to leave at 8pm the same evening, ready for a summit push which could take a further 16-24 hours.

As you can probably tell at this point, to summit Mount Everest requires a lot of pushing. I felt this first hand when I felt it my turn to go to the toilet whilst waiting in the tent for the start of the summit attempt. I got out of the tent on the flat South Col, and just wearing my inner boots and down suit, waddled over to a place in the view of every tent on the Col. I then had to expose myself for a good 10 minutes in -40 degree winds, gasping without my supplemental oxygen. This was by far the hardest push so far.

Finally, at 8pm, we got the go-ahead. All our team members clambering out the tents, to see a mass of head torches, as 200 climbers from different teams prepared for the climb of their lives. I found my Sherpa, Chhewang Dorjee, and together we climbed into the darkness. I followed Rob, his Sherpa, Becky and her Sherpa for the first many hours. Time stood still as we climbed into the darkness, electrical storms flashing in the distance. I had no concept of time, and my watch was buried under a down suit which I wasn’t going to remove in these -40 conditions. Behind me, a trail of head torches a mile long followed slowly, as each climber crawled up the hill.

Eventually we reached the balcony, a place half way on the climb, where we changed our oxygen cylinders, or more precisely, our Sherpas changed them for us. Then all of a sudden, before I knew it, Chhewang Dorjee was pulling me up and we were off, ahead of the queue. I looked in front, then behind. There were no climbers in front of me, somehow we had overtaken everyone at the balcony, so side by side with Dorjee, we climbed onwards into the darkness, seemingly alone. Physically this was the hardest part of the climb, effectively pace making 200 climbers behind me. Apparently Rob thought I was going too quick and had a risk of summiting in the dark, but I had no concept of speed, I just kept plodding with Dorjee. I saw the first summit, the South Summit of Everest. Aiming for this must have taken another two hours, and by the time we reached the peak, it had started to get light. The alpine glow crawling over the Himalayas sprawled out for hundreds of miles all around us. Reaching the peak of the South Summit, I knew we would make the summit, it was just a matter of the Cornice traverse with an 8000ft drop into Nepal, and a 10,000ft drop into the Plains of Tibet to negotiate. After this came a series of rock steps before the notorious Hillary Step. Along this traverse, there was space for 2 feet, either side was simply vertical space.

Then I saw it, the summit, I was 50m away, but slowing down. All of a sudden, I seemed to be gasping for air, and knew instantly that my oxygen had run out. I pointed to my oxygen system, letting Dorjee know, then simply collapsed to my knees. Dorjee managed to change my cylinder quickly, although it seemed like an eternity. Seconds later, I was back up and climbed to that place where dreams are made of.

To explain the feeling of reaching this place would be impossible, and the only vocabulary that I have found which comes close is euphoria. Try to imagine how you might feel; you may then get an idea of all the emotions which come flooding in. 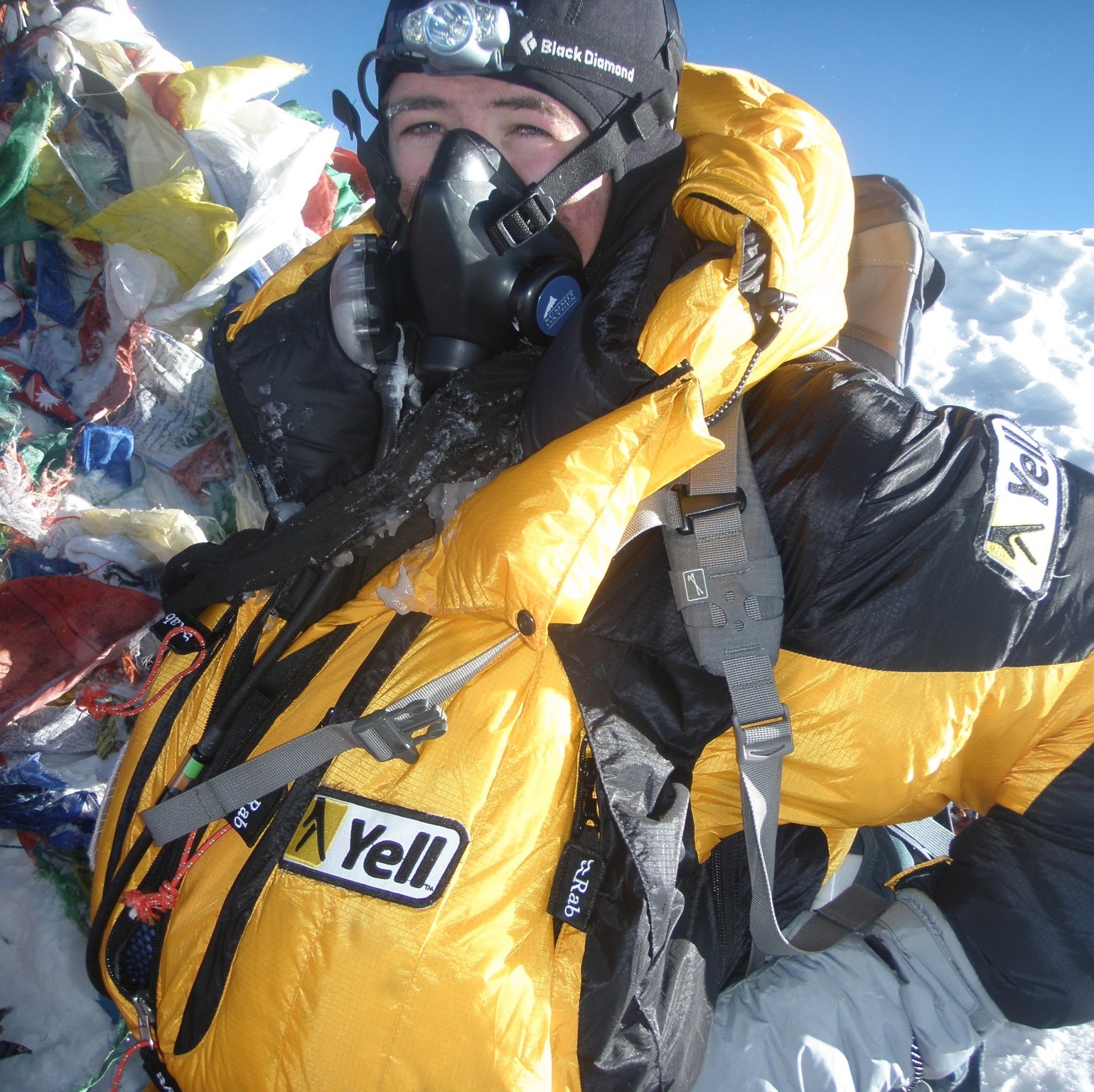 The descent was horrendous. Rob narrowly avoided frost bite in his feet, Becky wasn’t so lucky. As news channels all round the world depicted, the queues on summit day were crazy, and summiting in the first group, I struggled to descend with so many people on the mountain, especially in places just wide enough for 1 person.

Fortunately, Chhewang Dorjee came to my rescue again. He climbed back up from the South Summit, past the groups of ascending climbers, and managed to negotiate a way back to the South Summit for me. Often unclipped with an 8,000ft drop below us, I trusted him with my life, as he held it by a piece of dyneema.

Eventually we made it down, back to Camp 4, then to Base Camp, and after a great deal with the insurers, got a great deal on a helicopter back to Lukla, then onwards to Kathmandu and Home.

This is a very condensed version of events, but hopefully one which puts the main points across. Of course the main point is just about to follow.

I have to thank many people who made this expedition and dream possible. Chhewang Dorjee, my Sherpa brother who saved my life many times, I owe my summit to you. To Dr. Rob Casserley who was there every time Dorjee wasn’t, and again, made the summit possible.
To Henry and the team with Himalayan Guides, this would not have been possible with all your expertise and wisdom.
And of course the team, Mollie, Becky, Rick, Rob, the full team of Sherpas and the rest of the team on Everest and Lhotse, it was a privilege to spend such an experience with you all.

Closer to home, the expedition was made possible by Yell Group, who believed in me and my ability to make the expedition possible.
Additionally, Wardour And Oxford who gave me the commercial expertise to make the expedition sellable.
Finally to my Mum who has always believed and supported me on every step of my journey and to all family and friends, again thank you so much to everyone for their support.

I must wrap this blog up now, for I have a train to Penzance to catch. I will be spending the next 2 weeks cycling from Lands End to John O’Groats. After another rest, I will be repeating Lands End to John O’Groats again in September, before the Dublin marathon and future expedition planning in October. There are many opportunities now on the horizon, and I hope to write my experiences in more detail. All I can say is thank you all for following, and watch this space. Everest 2012 isn’t quite finished just yet, and there’s plenty more adventures to be had!

“Her Majesty’s sends warm good wishes for every success to you and to all those involved in the expedition, for the achievement of your goal and your safe return.”

“Matthew is a remarkable self-motivated young man who possesses a strong determined drive and zest for all he aims to achieve. His maturity and inner strength far belies his young ages, and I wholeheartedly support him in this, the jubilee year on his expedition to summit and return safely from Everest, and achieve his goal in supporting Global Angels and Climate Unchange; a challenge which will push him to his limits and beyond.”

“Matthew is extraordinary. In him, we have an ambitious, academic young man, in the pursuit of excellence. Global Angels and Wardour And Oxford are proud to partner and support Matthew in his quest to climb Mount Everest. He embodies the spirit of both our brands and we wish him safety and well-wishes in his pursuit.”