Over the past few months, I have been busy working on a project which is essentially the follow up to my Everest expedition back in 2012. I’ve been making progress in a number of areas, but I wanted to share a story of one area (the leading concept of my project) which has suffered a minor setback. For a number of months, I have been doing a regular paragliding flights, building airtime and gaining some necessary skills which will allow me to eventually take my love of flight into a wild place. However on Monday 12th July 2015, my paragliding career momentarily crashed into the dirt, then into some patchy grass, followed by a very conclusive coming together of pilot and sharp Cairngorm rock. I now want to go into detail of just how that happened. *The following details may affect those of a nervous disposition; keep reading to cure this affliction.

So I started my day at the Cairngorm mountain car park. I recently bought a van which I’ve been converting into a camping type utility vehicle, complete with wine rack and Napoleonic era sword. This has the added benefit of allowing me to stay close to the venue of choice which is perfect for climbing and flying, and nowhere is this more apparent than at Cairngorm where you can park halfway up the mountain. Over night, the conditions were extreme as always. It is the height of summer, but that didn’t stop the rain lashing down and the occasional gust buffeting the van (known as Daisy) sideways.

By morning however, the conditions were calmer, and a steady wind of 8-12mph was present; not light, but equally not too strong. I had driven over from Aberdeen in order to get some more flying hours in, so I quickly made breakfast and then kitted up for a brisk walk-in to find a suitable launch spot. It should be noted that the Cairngorms, and in fact most of Scotland, are known for high wind levels, along with arctic level summer temperatures and the occasional wild haggis. So a wind of 12mph was survivable and could be considered a ‘light wind’ day by Scottish standards. Indeed, this very winter, I was blown over an uncountable number of  times during one particularly windy day climbing in Coire an t-Sneachda. The gusts on that day were around 90mph, so on this particular Sunday, the winds were light; you get the idea.

I got to the launch site half way up a ridge (Fiacaill a Choire Chais) leading to the Coire an t-Sneachda plateau in about 45 minutes and waited for some walkers to leave so I could have the ridge to myself and save any embarrassment if the first launch didn’t go to plan. The wind was gusty, but never varying more than 5mph in 5 seconds, which is a good rule go by. I had a struggle laying the wing out as the angle of the slope was shallow enough for the wind to fill the cells of the glider, so I weighted down the trailing edge with a stone or two, protecting the thin silk fabric with some moss.

Eventually, the wind died just enough for me to front launch – running forwards for about 5 meters before being hurled skywards for what I hoped would be an exhilarating ride. It turned out to be just that. 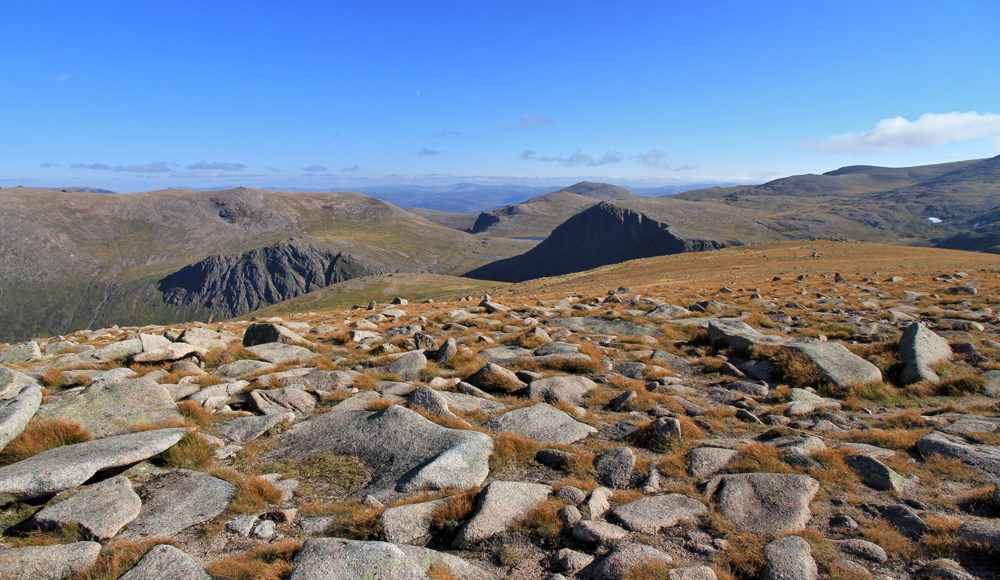 My wing has an airspeed of roughly 18-20mph, and so as I was caught in a gust above that figure, I was being helplessly pushed backwards and veering dangerously close to the rotor, a turbulent patch of air behind a ridge. This didn’t matter so much as I was now only about 1 meter above the ground, and so if the glider stalled, I wouldn’t fall far, but I was still drifting backwards at quite a pace. This is quite a strange situation, as when attached to the harness, it is difficult to see directly behind you, and so moving backwards is essentially blinding. I considered turning the wing and going with the wind, but after a quick sum, I figured this would be a bad idea. If the wind was going at 20mph, and my wing has an airspeed of 20mph, that would mean as soon as I turned, I would accelerate over the ground and reach 40mph whilst descending rapidly. I didn’t have the height for this maneuver, and even if I did, an impact at 40mph could easily break both legs and possibly more.

So I opted for the slower but more unknown option of drifting backwards, now at about 10-15mph a meter or so above the ground. The next few steps happened so quickly, there was zero time to react to the fuckery which was now unfolding around me.

As soon as my feet touched the floor, I lost balance, simultaneously heel kicking a boulder and falling backwards onto the floor which was littered with granite and schist rocks and boulders. Before I could even think about stopping, the wing inflated and started hurling me like a rag doll  across the floor. The rocks on the plateau are particularly sharp, and each one pierced my legs like a razor. I was utterly out of control, being dragged at around 20mph across the surface from hell with no real way of stopping. The only way out of this situation was to grab the lines and pull them in till the glider itself is within reach. Whilst flying across the floor however, this was simply not going to happen. One minute I was sliding on my chest, the next, I was flipped over onto my back, headfirst along the plateau. I could see rocks and boulders approaching, and then screamed in agony as I subsequently hit said boulder and tore another piece of flesh from my legs, completely at the mercy of the wind, unable to stop. By some miracle, I avoided hitting my head on any rocks (I felt no need to field test my helmet).

Onwards I was carried, for what was in reality around 30 seconds, but what felt like hours, over this boulder field a couple of hundred meters in length. A thought crossed my mind that something bad might be about to happen, most likely hitting my head hard and losing consciousness, but somehow, I span round and now being pulled feet first, managed to grab a handful of lines and pull them in as fast as my battered body would allow.

Mercifully I came to a sudden stop and writhed in pain. My legs were in agony, my trekking trousers covered in blood; and my hands which had been protected by thick French leather gloves were shaking and feeling that kind of pain where you have fallen on a hard surface. I looked at my gloves which used to be made of around 3mm leather. They were completely shredded where I had tried to stop myself in desperation. I lay in pain and shock for some time, hoping no one had seen my mistake, so that I could be left to come round at my own pace. I did seem to quickly come round to my senses however as I hauled myself upright and took out a pain au chocolat from my bag. I looked back at my unconventional route across the rocks, shuddering at the thought of what just happened. I unzipped my trousers and looked at the state of my legs. They were completely shredded and my right knee had already swollen which was making standing up extremely uncomfortable.

It took me a while to gather myself, and then somehow stuff the wing and all the kit back into my kit bag. The walk down took 2 hours, every step was adding to the pain produced from each slice of the rocks on my legs. My trousers were cut up badly and blood stained, and at one point, a family of 4 turned round after seeing me coming down, clearly making the decision that where I had come from was not the place for them.

As I write this, I’m sitting in bed, as I have done in various positions for the past 24 hours, knees thoroughly bandaged after a quick stint in A&E. I have been lucky not to have broken my patella (knee cap) which is still swollen and throbbing, although this hasn’t yet been confirmed by x-ray (it turns out not all hospitals in Scotland have the same technical equipment most of the western world, and indeed much of the eastern world, is used to).

In thinking what could have been, I had made the best of a bad situation. The initial impact was only slightly harder than a normal landing, but it was the scraping which subsequently did all the damage. A sobering thought however is that had I lost consciousness by hitting a rock, the wing would have kept flying, or at least trying to fly whilst dragging me along underneath. There was the potential to end up in a small pond just below the plateau, but more worryingly, the wing was pulling me into Coire Raibert which leads to Loch Avon, a huge loch in what is essentially an uninhabited valley.

As I cried out in agony each time a new jagged rock ripped open another hole in my leg, I didn’t appreciate what fun my paraglider was having. In hindsight, it was having a great time flying low across the ground, in its element taking me for a walk. Fortunately, play was suspended for the day shortly afterwards, and Matthew learnt a valuable lesson from quite a powerful master. 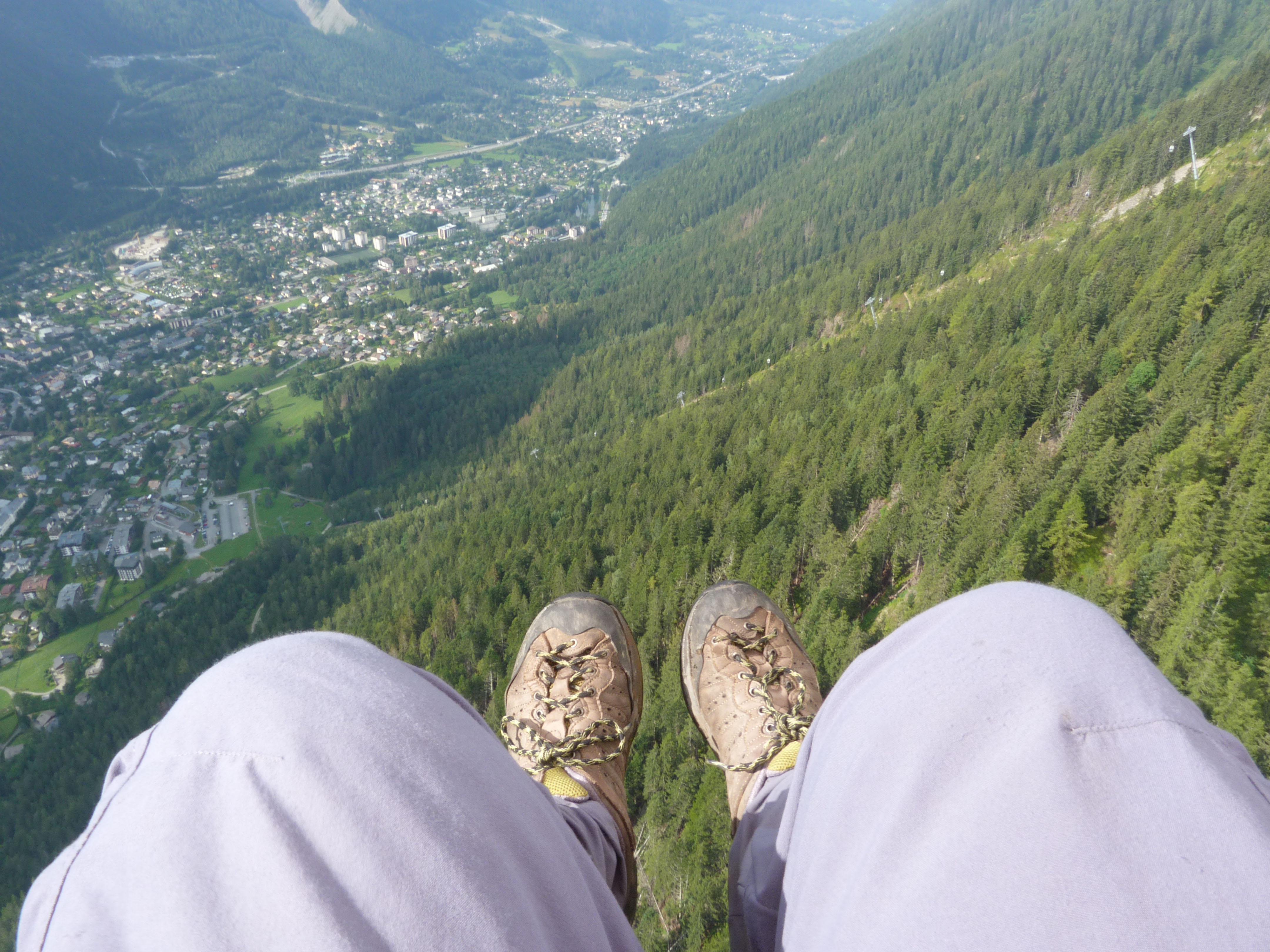