Having just finished as a participant in a PHD researchers study, I thought it would be a good chance to give a small insight into the testing at this level. As an undergrad, it’s a great chance to get involved in many weird and wonderful studies, and essentially become a guinea pig leaving you usually very tired and normally with less blood than when you started.

The study I was involved with was a test of the supplements Beta Alanine and Sodium Bicarbonate, on football specific sprinting performance, at altitude led by PHD researcher Bryan Saunders at NTU. This was a great test for me, as it marked the first time I was able to use the Olympic Certified environmental chamber for its altitude function, in the run up to my Everest climb, and my 2 preparatory expeditions. 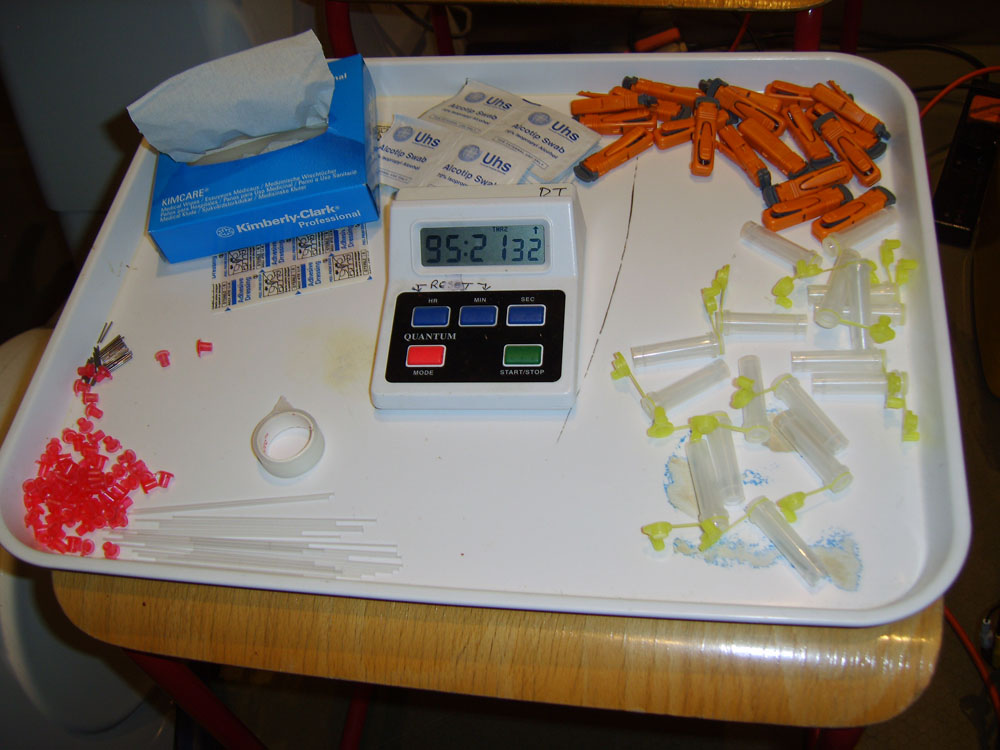 The first session was the most difficult, as it involved a lactate threshold test, and then after 15 minutes, a Vo2 Max test to fatigue. This was ironic as it was the only session not done in the environmental chamber, therefore at sea level, yet still the hardest. The final Vo2 Max test involved running at a steady 12km/h and, starting at a 1o incline, increase the incline by 1o every 3 minutes, until every muscle is screaming at you to stop. Unfortunately, you have to give the testers a 1 minute warning as to when you are likely to stop, so they can take a final oxygen sample. If you are sensible, it’s easy to guess when you have a minute left; however if like me you wait until you are completely exhausted before the sample begins, the final minute is pure agony in slow motion. So after that little escapade, I received my Vo2 Max result, which was 65 ml.kg.BM-1; firmly in the athlete category, even if I say so myself; but I had earned it, right?! 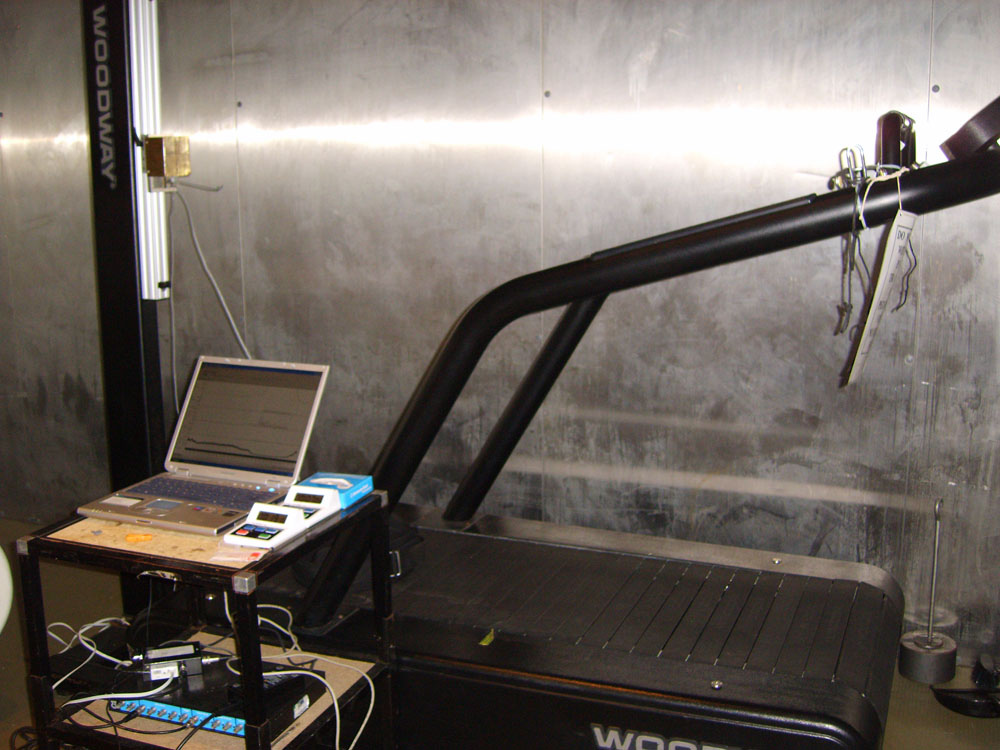 Now the preliminary testing was out the way, we could get on with the real thing. This was split into 5 sessions. The first, a familiarisation which was half of a normal session, enabled me to get used to the protocol so everything ran smoothly during the actual testing. Then came 4 actual tests; 2 in the first fortnight, then 1 month taking supplements, then the final 2 tests in the next fortnight. 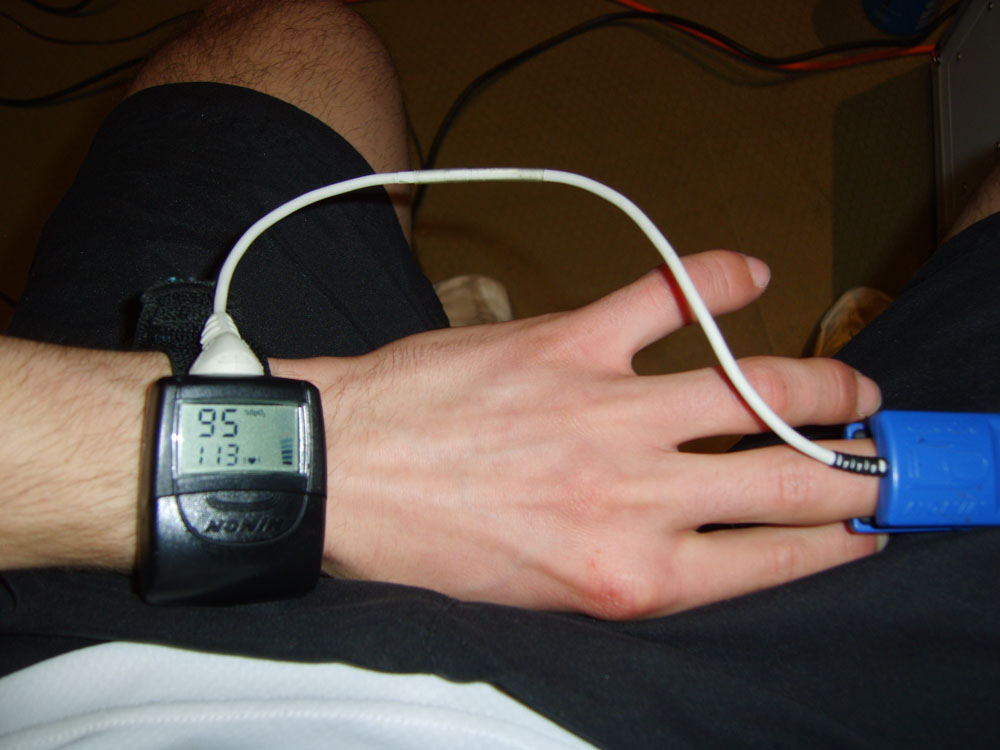 So for a quick over view of the study protocol on each day of testing:

Arrive at uni at 9am (v.early for a student). Get a fixed breakfast (toast (often burnt, sorry Bryan!) and jam) and 12 tablets of either Sodium Bicarbonate or the placebo. At 11am, have 8 more tablets, a banana and a nutri-grain elevenses bar (pure heaven). The study then started at 1pm. First was a 5 minute warm up, followed by a 10 minute rest in the chamber which was set to 15.5% O2 (2500m). A blood and blood gas sample were taken, then 5 x 6 seconds maximal sprints, on a non-motorised treadmill follow. These are the hardest sections of the protocol, since they are flat out, and are a test of pure power. As soon as this is completed, the bloods are re-taken, and a 15 minute rest follows. 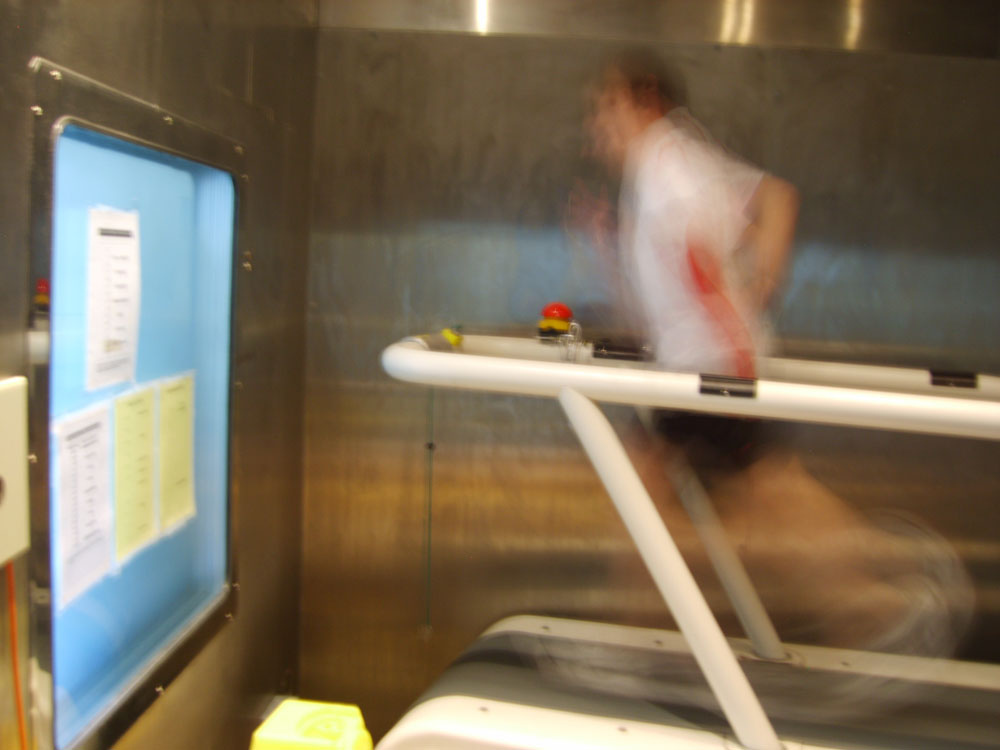 After 15 minutes, the first 45 minute sprint protocol is started, which involves varied sprint speeds, controlled by a computer, which vary from 0km/h to 25km/h. Initially, this is a weird feeling, as the computer controls the speed, and does so at an instant. So there is great potential for flying off either the front or back of the treadmill. 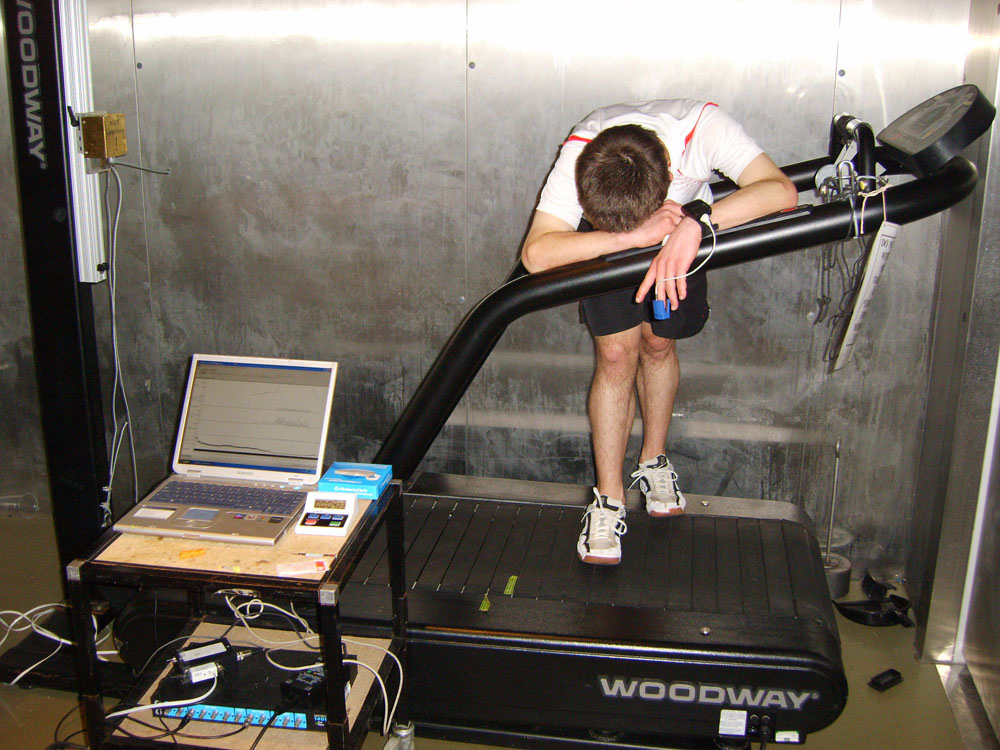 As soon as 45 minutes is up, more bloods are taken, and a second set of maximal sprints begins immediately. This again is a weird feeling, since this treadmill moves freely under your feet, and you are restrained only by a waist harness to stop you simply running into the wall. At this point, the sprints are killers, and only Bryans legendary motivating shouts keep you working maximally for every sprint. As soon as this is finished, another set of bloods are taken, and a 15 minute rest ensues. This rest time flies by; and as soon as it’s over, a second 45 minute variable sprint protocol starts. At this point the 25km/h sprint sections start to hurt; but mainly because in the back of your mind, the hardest section still awaits. This was made much easier however by the modern ghetto-blaster on wheels which hurled out hours of trance, a definite highlight of the experience!.

As soon as the second sprint section is over, another set of bloods are taken, and the hardest section begins. After almost 100 minutes of running, 5 more maximal sprints remain. Each one a killer, until eventually the last sprint is reached. After a final 6 seconds of pure anaerobic pain, the finger goes over the side for the last blood samples. End!

After every session, the weight is measured, and each time, I lost on average 1kg of body weight through sweat.

This protocol is then repeated 4 times during the full study. Unfortunately for me, the altitude packed up during my first test after I was over half way through, so maybe fortunately, or unfortunately, I was given the pleasure of doing the whole thing again!

In between the first 2 tests and the final 2 tests, I had 1 month to take the supplement, which was either Beta Alanine or the placebo. I had to take 8 large tablets each day, for 4 weeks which when plated up, was enough for a full meal….

I also had a lot of time to think of things during each 90 minute protocol, so I sadly counted up all the features of the study; which in turn made the sessions go by much quicker!… I calculated that during the course of the whole study, I had done 80 x 6 second maximal sprints, 10 x 45 minute variable speed sprint protocols; and had been given 120 x bicarb/placebo tablets, 250 x beta alanine/placebo tablets, 370 x tablets in total, 37 x blood samples and 37 x blood gas samples. So to summarise, I had run a lot, ingested a lot of tablets, and given a fair amount of blood.

A thank you goes to the team at NTU for allowing me to use the chamber; and Bryan for his study, endless banter, and his epic iPod full of trance! 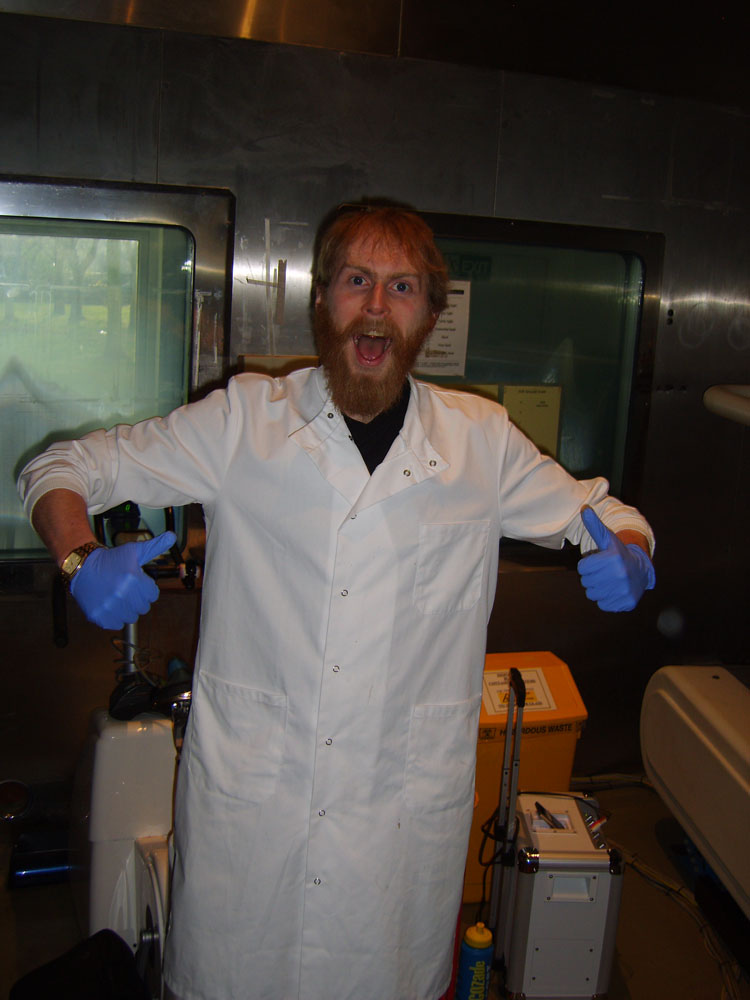