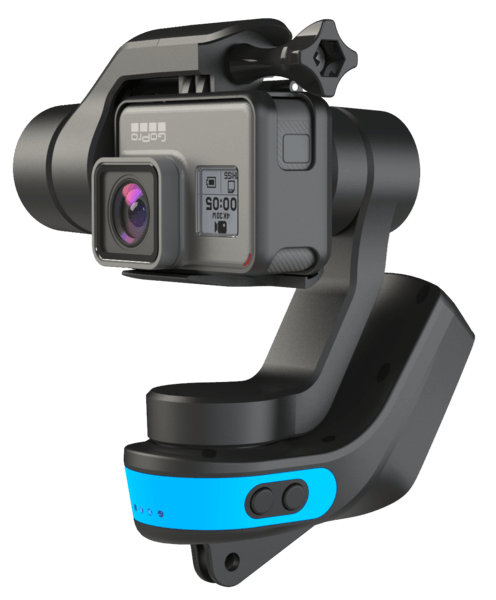 The Slick. A super stabiliser slash gimbal for the GoPro range of action cameras is perhaps the most important accessory to have in your action film making arsenal. It’s fair to say that GoPro’s have revolutionised film making. They have made it easier for amateur content creators to make action sport home movies than ever before, and they are widely used in professional film making for the shots where no other camera could work.

Whilst not the only camera in my flight bag, the GoPro is the most important. My 360 cameras add another element of immersion to the viewing experience, and my DSLR adds some film quality Vlog and B-roll type footage, but it’s the GoPro that truly shoots my most important moments – when I’m diving off a cliff edge, or skiing down a precipice, both times with my trusty speed wing above me. Very often though, GoPro footage is unusable. They need good lighting conditions, some work in post production to edit colours, and despite their incredible internal stabilisation features, the footage often comes out unwatchable for all but the most avid YouTube junkie.

Whilst you can cope with some poor sound quality and some odd colours though, it’s jerky unstable footage that really turns viewers off. There’s nothing more professional than a smooth panning shot, or a crisp follow shot that looks like you’re gliding over ice.

Fortunately, there is a tool you can use to really up your cinematic game with a GoPro. It’s called a gimbal and whilst there’s a few out there, I use the best, a Slick. I’m open to other suggestions of course. The GoPro Karma Grip is fantastic, it was built by GoPro, for GoPro, and therefore provides the best actual stabilisation, period. However, mounting the Karma Grip is almost impossible for anything other than a selfie stick or pole. It’s just too unwieldy, to large in all the wrong dimensions. It just doesn’t work for first person action filming, or any filming where you don’t have a free hand to hold the gimbal.

The Slick on the other hand is one of the first wearable gimbals for the GoPro, meaning that you can mount it on any GoPro mount, basically it can go anywhere you’d traditionally mount a GoPro. 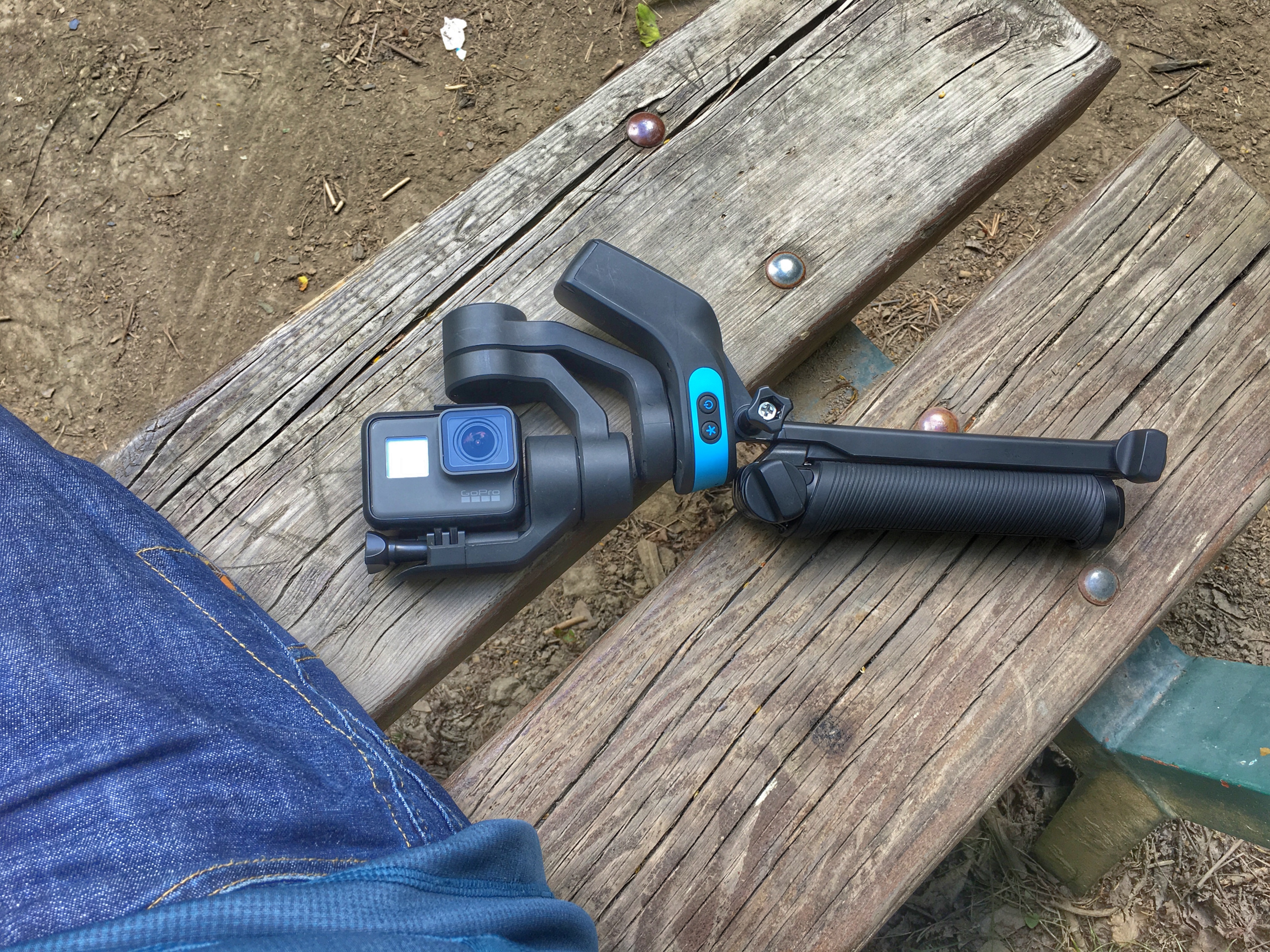 So what does a Slick do? Well in simple terms, it stabilises out movements via internal motors, to ensure the camera moves smoothly, even when there person holding the camera isn’t. You’ve probably seen that with each new GoPro iteration, the internal stabilisation features get better and better, however internal stabilisation only goes so far. For a start, you probably have to crop around 10% of your footage to use the stabilisation settings, and then still do some editing in post production to smooth out any remaining vibrations. The point is, with action sports like skiing, running and the like, you just can’t erase vibrations via the camera alone. That’s where a gimbal like the Slick comes in.

In terms of functionality, the Slick has 4 buttons and some of the best charging lights I’ve ever seen. Along side the power button is a mode button. This allows the Slick to change between panning, panning and tilt, and locked follow functions. What this means simply is that you can customise the Slick depending on what sport you’re doing. If like me you fly, you’d set your slick to the pan and tilt mode. This means even if your horizon changes, the slick will adapt to your every turn. After the follow features, there is perhaps the most awesome film making tool seen on any GoPro accessory, the moving time-lapse. If you want cinematic GoPro footage, you need to shoot moving time-lapses! In short, this is where the camera moves smoothly during a time-lapse. It’s virtually impossible to achieve without additional equipment, but the Slick really excels in this function.

So what’s good about the Slick? Well for me, quite simply it’s the versatility. I received my Slick a couple of weeks before heading out to the Alps to shoot some speedflying footage, and had planned each flight where I’d be using the Slick. What I didn’t expect though was that in reality, flying only made up about 10% of my Slick footage. Instead, the remaining 90% was B-roll footage of my journey, walking into the mountains each day, and just capturing incredibly smooth footage.

I think this was the biggest surprise to me, not because I didn’t think I’d film some non-flying scenes, but actually what the Slick did to my GoPro. It basically turned my little action camera into an entirely different beast, capable of capturing wingovers and barrel rolls from a speedwing, and moments later, capture a stunning turning time-lapse or a crane style tracking shot from the landing field. For this trip, I didn’t even take a DSLR, so all the filming I did had to be captured from 2 GoPros. This is no mean feat, it’s tough to trick the viewer into thinking the wide angled action camera is actually a cinema quality DSLR. You can’t quite do this, but using a stabiliser like the Slick gets you as close as you’re likely to get.

My biggest praise for the actual unit itself (not what it was able to do for my film making) centres on the bombproof construction, meaning good battery life, fast charging by micro-USB (you get the coolest charge cable I’ve ever seen), waterproofing and just general sturdiness. This may contribute to some additional weight which I mention in the next part, but ultimately, this gimbal isn’t something I’ve ever worried about breaking, unlike others I’ve tried. The Slick guarantee is also pretty awesome too in case you do manage to drop it off a cliff whilst blindly working the follow cam..

The Not So Good

As with all kit, there’s always room for improvement. My thoughts on the Slick are overwhelmingly positive, and it will definitely be accompanying me on all future trips, however if I had to list some negative points for balance, they would be these:

Weight – the weight of the Slick isn’t excessive, however it can cause some challenges if mounting it to some sticky GoPro mounts, particularly due to the device being top heavy. I have a helmet mount which due to the nature of the helmet, isn’t the most secure mount in the world. It works well for a solitary GoPro, but with the added weight of the Slick, it started to move as I turned my head. Amazingly it never became detached, however I wouldn’t be surprised if this happened through continued use. For marginal mounts therefore, I think making sure mounts are bombproof before mounting the Slick is the most important step. For your traditional selfie stick/follow cam, this proved no problem at all.

Speed – The Slick performs impeccably for 99% of sports and movements, however the one problem I had when riding my super small speed wing was that the Slick struggled to keep up during super tight, high g-force turns. To be fair, no device quite cuts it during this scenario, and during biking, running, kitesurfing, and virtually any sport where you don’t hurtle towards the ground at 80mph before performing a barrel roll, the Slick will perform just fine!

Sound – I’ve seen some reviews complaining of sound from the Slick. Generally this only happens with the GoPro Hero 5 Black due to the position of the mic, however before complaining that there’s some audible motor noise, it’s worth questioning what you expect from a GoPro at all. In reality, I rarely use audio directly from the GoPro due to the awful quality, wind noise and just the fact that a good shotgun mic is a far better solution to pick up audio for your next YouTube edit than even the best DSLR on the market can provide.

So there you have it. An overview of the Slick gimbal/stabiliser that I would absolutely 100% recommend for anyone filming with a GoPro. Thanks to the weatherproofing, compact size, robustness, reliability and range of functions, I would recommend a Slick above the likes of the Feiyu WG2/G6 and the GoPro Karma Grip, which as mentioned, whilst having unbelievable stability, is just impossible to mount well. If you want to know more, head to Slick.Video. If you want a manual, you can get that here.