The Ascent Of Rum Doodle 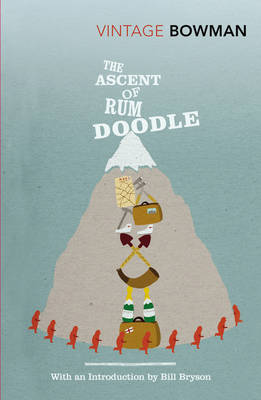 Whilst dining at the Rum Doodle restaurant in Kathmandu after the ascent of Baruntse & Mera Peak, I decided to buy ‘The Ascent of Rum Doodle’ by W.E. Bowman. I had heard great reviews from the leaders and people who had previously read the book which is held in high regard among climbers. Reading the book is a delight, and the story pure genius. As I cannot do the book sufficient justice, below is an extract. If you understand the humour of this page and have never read the book, I strongly urge you to buy it.

“After three hectic months of preparation we met in London, on the eve of our departure, for a final review of our plans. Only Jungle, who was to have spoken on the use of the radio gear and his own methods of route-finding, was absent.  He rang up to say that he had taken the wrong bus and was not quite certain of his whereabouts; but he had just caught sight of the North Star and expected to join us shortly.”

“Burley, although not at his best – he told me was suffering from London lassitude – gave us a detailed picture of the transportation arrangements. The object of the expedition was to place two men on the summit of Rum Doodle. This necessitated the establishment of a camp at 39,000 feet stocked with a fortnight’s supplies for two, so that in the event of adverse weather conditions the party could wait in comfort for an improvement. The equipment for this camp had to be carried from the railhead at Chaikhosi, a distance of five hundred miles. Five porters would be needed for this. Two porters would be needed to carry the food for these five, and another would carry the food for these two. His food would be carried by a boy. The boy would carry his own food. The first supporting party would be established at 38,000 feet, also with a fortnight’s supplies, which necessitated another eight porters and a boy. In all, to transport tents and equipment, food, radio, scientific and photographic gear, personal effects, and so on, three thousand porters and three hundred and seventy-five boys would be required…”

The Ascent Of Rum Doodle on Amazon