Speed Flying Through The Storm

The end of winter 2017-18 presented the perfect opportunity to fly some incredibly marginal and storm conditions with the 11m speed wing. On the world’s highest mountains, the conditions for flying are rarely perfect, so in training for the Riding Giants expedition we took to the stormy skies via the path rarely travelled. I say rarely travelled as I doubt anyone has ascended Watson’s Dodd in quite the same way. Gearing up in moderate snow conditions, we started the Lake District run up to Stybarrow Dodd via Sticks Pass, however the weather was quickly deteriorating. With only thin slivers of sunshine, the snow really started coming down, and turned into a full whiteout by the time we reached the sheepfold. Dressed in thin running clothes, shorts and compression socks was possibly not the most appropriate choice of clothing, but running up the steep hill in shelter from the wind with a speed wing and harness on the back still pained the lungs and we were well warm by the time the weather truly descended.

We quickly realised the weather wouldn’t hold out for long, if at all, so we took a detour straight for Watson’s Dodd. We crossed Stanah Gill just above the sheepfold and started plodding up the increasingly deep snow pack. Out of the wind shadow of Stybarrow’s western flank, the breeze picked up until at around 700m, onward progress became futile. The higher we went, the windier it became, and with every step upwards the visibility reduced a few hundred metres. So there we stood, at 700m, standing in shin deep snow, in running shoes, compression socks and shorts. One sweaty base layer, an ultra thin running jacket and my winter saviour, a Rab Generator jacket. I was cosy on the top, but becoming positively chilly on the legs, particularly the exposed knee caps which were receiving the full brunt of the wind when trying to peer through the horizontal snow towards Thirlmere. Every so often I could see Thirlmere through the gloom and swirling snow as the wind periodically dropped, but after no more than a minute, it was back to storm conditions. Flying would be relatively treacherous, but we’d been standing on the hill for over 10 minutes, and the thought of descending by foot was becoming decidedly less appetising. So the head calculations commence; can I fly away safely? Can I see the landing zone? What is the cloud base? Is it too turbulent?

It took long enough to come to the realisation that I could probably fly, so long as I was prepared for a bumpy ride. The main difficulty would probably be the launch, which is always tough in strong winds, particularly on the more gentle slopes. I took out the wing, anchored it with snow, but almost immediately, a squall came through. The wing was almost blown away, but I quickly dived on the trailing edge and regretted undoing my neatly folded wing which I had packed only an hour before. Another 10 minutes was spent agonising over the decision to fly, but the squall soon blew out, and we were back to light snow, and a (very hazy) view all the way down to Thirlmere and the landing zone.

I clipped in, checked the lines, brought the wing up, turned, and started running as fast through the snowy heather as I could. The take-off was fast, I must have launched in a lull, but then all of a sudden I was rising on a pillow of air, soaring, which is always unnerving under 11m of cloth and a few strands of Dyneema. As soon as that gust had come, it was racing up the hill behind me, and I quickly sank back into the channel leading to a particularly spiky barbed wire fence. With the feet brushing along the top of the snow, I just scraped over the edge and into the river gully. This is where the flight got truly rough and active piloting was required all the way to stop the fast surging and easing the fast collisions with the intense gusts. As I descended though, the visibility improved and the landing was clear. I just had to get above the road to St John’s in the Vale, then I could put in some turns and get down to the landing field.

With the feet skimming the grass, I was truly happy to be down. I love the flying, but turbulence, particularly with a speed wing is rarely a pleasant experience. In the UK we rarely get the type of thermals which halt late afternoon Alpine flying, but we sure make up for it with days of endless gusts. No laminar breeze, no smooth airflow from the sea, just pure tempestuous gusts formed over the wild North Atlantic and raging Irish Sea. It was a horrible flight, particularly in the latter stages where this unstable air mass throws the wing up and down like an overzealous puppet master, the pilot continuously fighting to remain in control. But flights like this, whilst not good for the stomach, are good experience, they help you to understand the limits of the wing, or at least of the pilot, and to fine tune the active inputs needed for good flying.

With summer finally poking its head round the corner, I’m now more ready than ever for some smooth flying under blue skies and over green fields with the occasional flock of sheep or marmot..

Waking up early on a crisp April morning, we headed to Mungrisdale. The weather was calm, the wind was good. There were 4 Wainwrights to tick off and a flight of Bannerdale Crags’ easterly ridge, awaiting us through the unusual calm of a crisp spring morning. But would the weather hold for the 4 hour trip? The Lake District is notorious, both for its poor, generally non-flyable weather, and for it’s changeable conditions. You might wake up to glorious sunshine, but by the time you’ve packed your bags and spent an hour walking up the hill, the conditions change and you spend an impatient late morning sitting on the summit cairn in cloud waiting for the arrival of some blue sky and a hazy view of the landing zone. This is Lake District flying to me, countless days of carrying the wing to the top of the mountain only to carry it right back down again; too few days of airtime. Thank god for Swing’s light speed wings, and viva la Chamonix! 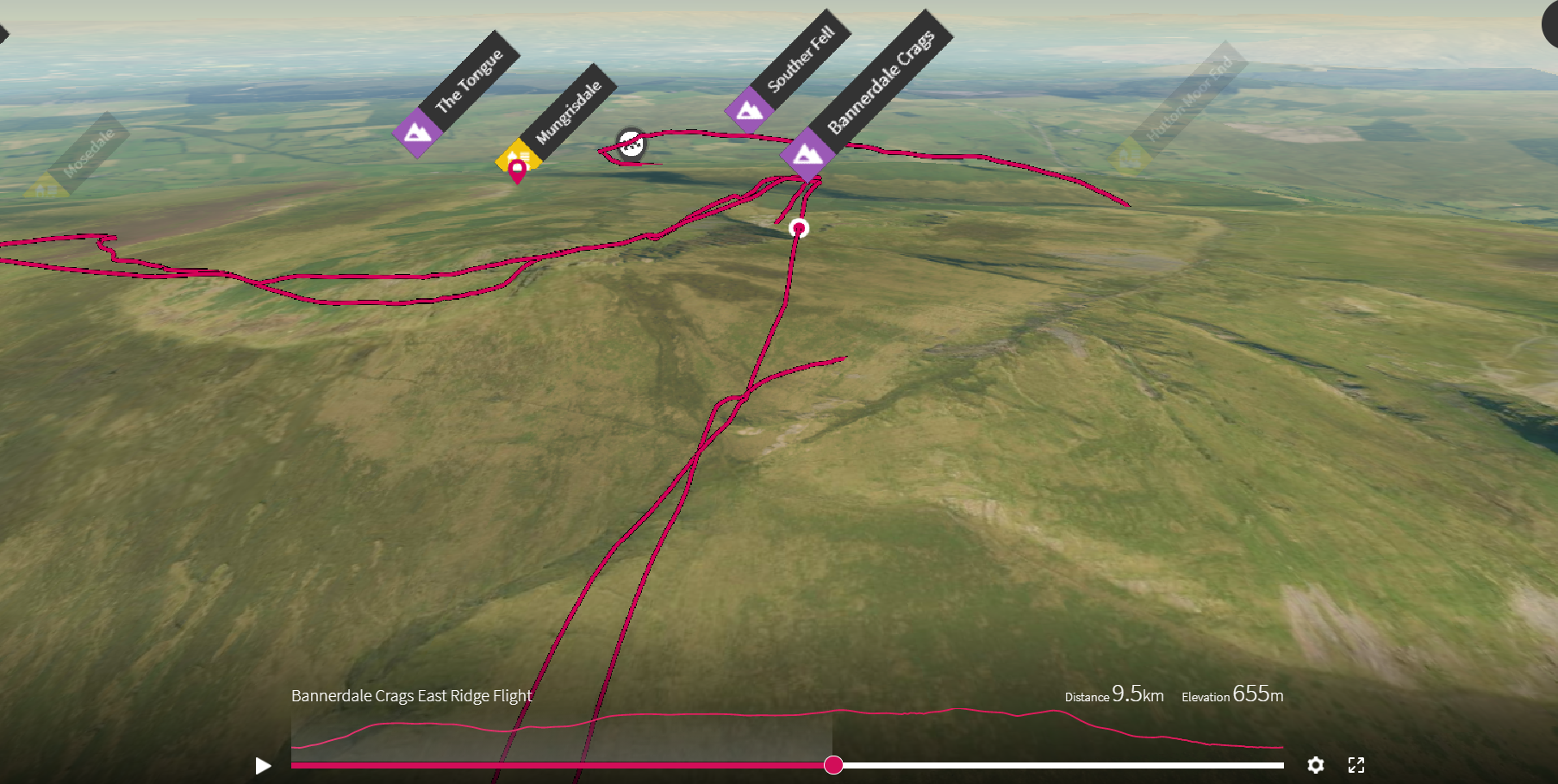 So having used Ordnance Survey’s handy mapping programme (where you can virtually agonise over your route before actually agonising over it), we set off for our first Wainwright, Souther Fell, swiftly followed by Mungrisdale Common, then an even shorter hop across to Bannerdale Crags. I spied the easterly ridge which I was aiming to cruise down with the speed wing, but then we saw Bowscale fell on the horizon, another one to tick off the seemingly endless list. 139 down, 75 to go, we grumbled. 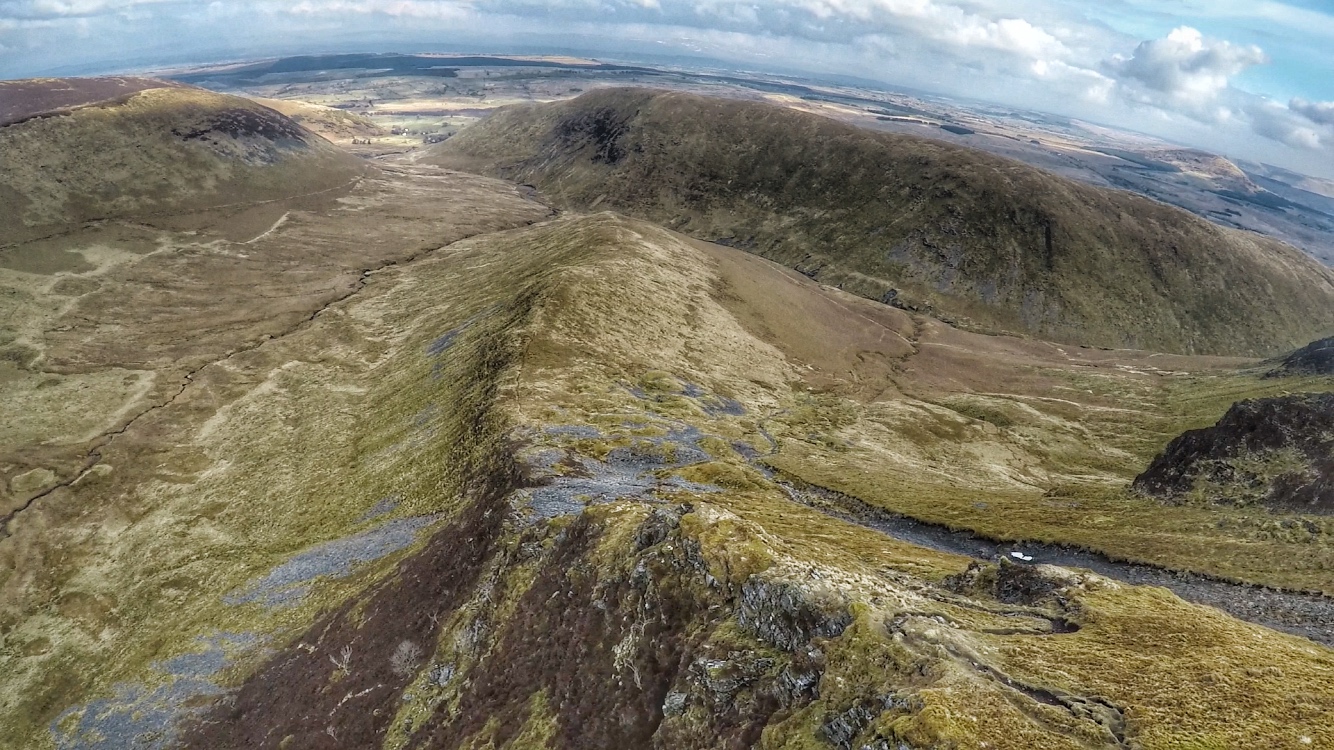 The weather was set to be good all day, but I always remain sceptical until I’m running down the hill with my wing overhead, surrounded by blue skies. But amazingly, the weather had held. As those local to the Lake District know, this simply doesn’t happen. There must always be a period in Cumbria during each 24 hours where precipitation must be seen to fall, where the waters must be topped up, but not this day it seemed. Today was one of those rare days where the weather just got better, the wind got lighter, and on standing at the top of Bannerdale Crags in the early afternoon having essentially summited it twice within the hour, I was left with only the descent.

It’s quite hard to sum up what it feels like, having spent hours wandering round the fells, getting higher and higher until you’re finally in a position to fly. When you eventually get to the launch site, a small sense of euphoria comes over you, the sense that you made it to the good part, that it’s now time to say goodbye to the mountain tops and speed down with the long grass brushing against your legs as you hurdle past knolls and rocky intersections at well over 50mph.

So the flight itself? Well it wasn’t fully mind blowing, just a do-or-die launch, a rapid descent to cruise the ridge, followed by some carving turns down the face. The Lake District isn’t big, but when it delivers, you can’t fail to land amongst the sheep and heather with a big smile and a heart of adrenaline.