The Microadventures With A Dash Of Science

Now, with only 3 days to go until I leave for Nepal; and with everything such as packing, acquiring medicine, filling out visa forms and even cleaning my boots still dirty from Lenin, still to do, I used some intuition and decided to utilise some precious time writing another truly outstanding blog. I then scrapped that idea and wrote the one below instead.

Since the expedition to Lenin, fortunately I have managed to regroup, and now partly understand the reasons why the expedition wasn’t as successful as the team would have liked. Unfortunately that’s just one of those things, part of life where not everything goes your way, and importantly a learning curve. The expedition I am about to take part in, in 3 days time is an expedition to climb Baruntse, a mountain at 7,129m in Nepal, with prior acclimatisation on Mera Peak. This is my main preparation for Mount Everest next spring, and hence is an extremely large undertaking. With this in mind, I have trained immensely hard over the past few months, and as a result, feel both physically and mentally ready to essentially succeed where I have failed before.

Over the last year, I have become quite familiar with a concept made popular by Alastair Humphreys known as Microadventures: http://www.alastairhumphreys.com/adventures/microadventures/

With this in mind, I wanted to do a few so called microadventures prior to Baruntse, which break up the monotony usually encountered after a few weeks of training in the same locations. Already with one microadventure under our belt prior to my Lenin expedition, I set out with a friend to cycle the costal perimeter of the Isle of Wight. Completing the cycle itself was no great issue, and at around 60 miles, we cruised round in about 5 hours. As with most microadventures however, not everything when completely according to plan. After arriving in Cowes, we set out to find a spot to bivvi, preferably on a beach, with the aim of doing the cycle the next day. After raiding the local co-op store for a bbq, and enough cardboard to make a mini house, we cycled the length of the East Cowes Esplanade and found a rather plush bivvi spot, complete with mini cave. After drinking a can of cold baked beans, we then set about making a cardboard floor that any homeless person would be proud of. At this point, we were blissfully unaware of our ever encroaching enemy, but eventually after checking the tide times on the blackberry (no microadventure is complete without access to the internet), we realised that at approximately 11:30pm, we would be washed out into the Solent. So on this bombshell, we packed up our mini home, cycled past the local drug dealers, and made a second home about 1/2 a mile back along the beach; one of the many benefits to being homeless. 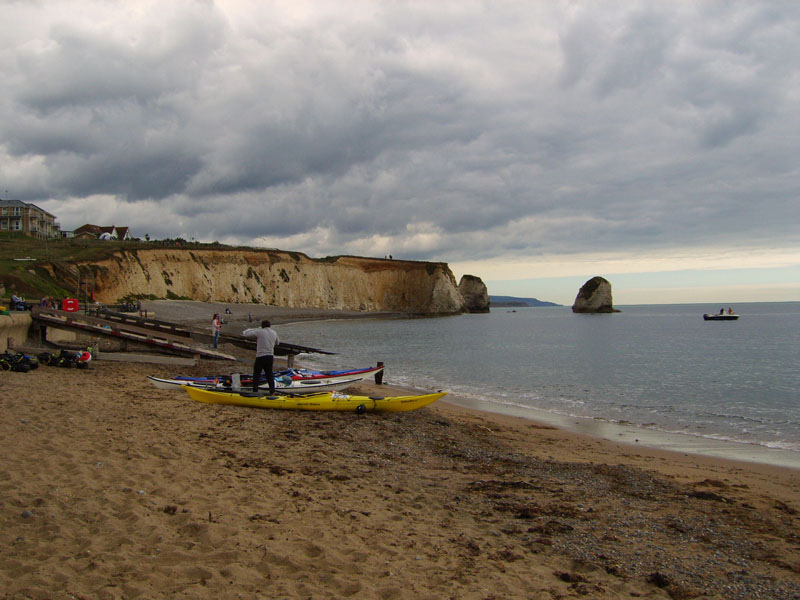 After the relative success of the IOW microadventure, another was crafted, this time set in the sunshine renowned county of Yorkshire. The last time I ventured into the Yorkshire Dales was during my Duke of Edinburgh gold training, where wide spread floods and extreme weather took the life of a royal marine. With this in mind, we opted for the relative safety of the North York Moors. The North York Moors are well known for their deposits of Kimmeridge Clay underlying the Vale of Pickering which were formed during the Upper Jurassic era due to fluctuations in sea level approximately 142 million years ago. Incidentally this clay is the source of 95% of the petroleum in the North Sea. In popular culture however, the North York Moors are better known for having the second and third best beaches along the East coast (Whitby and Scarborough) after the famous golden sands haven of Skegness. On the back of the cycle round the IOW, another cycle was opted for, this time starting from York, attempting to cycle through the Moors and over to Robin Hood’s Bay, then back to York all in 2 and a bit days with a round trip of 140 miles. Again, the cycle went rather well and generally without hitch, so it was left to the off the saddle antics to provide entertainment. Two nights in a row spent bivving can often be quite demoralising, especially when it’s generally damp, however the first night saw the arrival of an unexpected guest. Harry the hedgehog entered our ‘space’ sometime in the early hours, and was promptly photographed, then rolled down the hill and photographed once more. After taking a liking to our food store, Harry was back once again only this time however to find himself being sandwiched between two flip-flops and thrown very gently into the nearest bush. This was all quite bewildering, as there are not too many times in life you wake up with a hedgehog in close proximity. 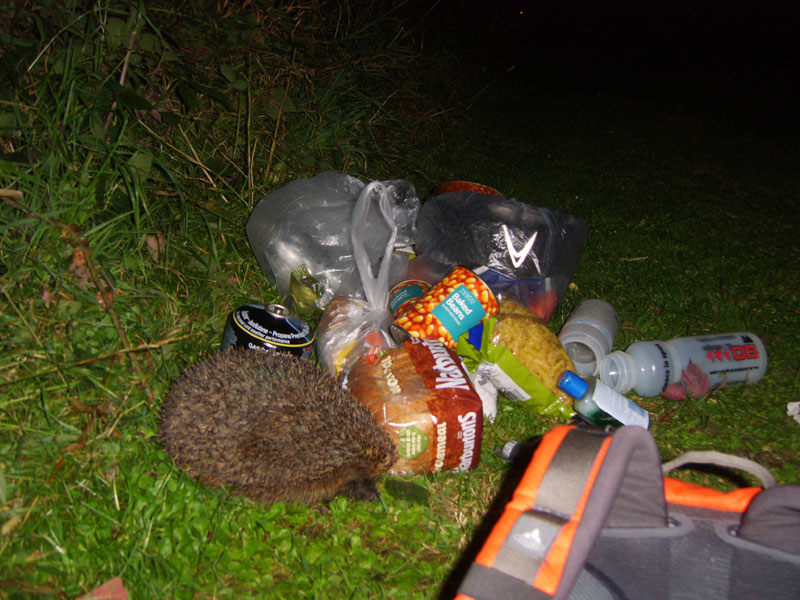 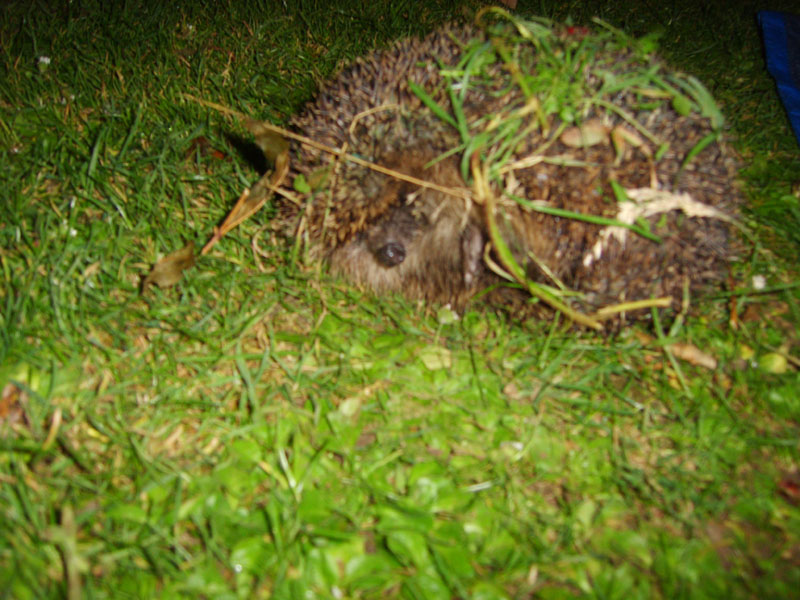 The rest of the trip included my cycling partner attempting to kick at least 3 people in the face, one being myself on more than one occasion, and another being a young girl in the swimming pool who has since developed caligynephobia.

For the final night, we bivvied in Robin Hood’s Bay, and after the previous nights escapade of eating a huge bowl of pasta using a pan handle and a bottle top due to an overwhelming lack of cutlery, we found a random house and promptly asked if we could borrow two spoons. The next morning included being molested by quite a large dog, in addition to discovering that something had eaten a chunk of our weightwatchers breakfast doughnut during the night. After washing the spoons in the sea and posting them back through the letter box, we made haste for York. 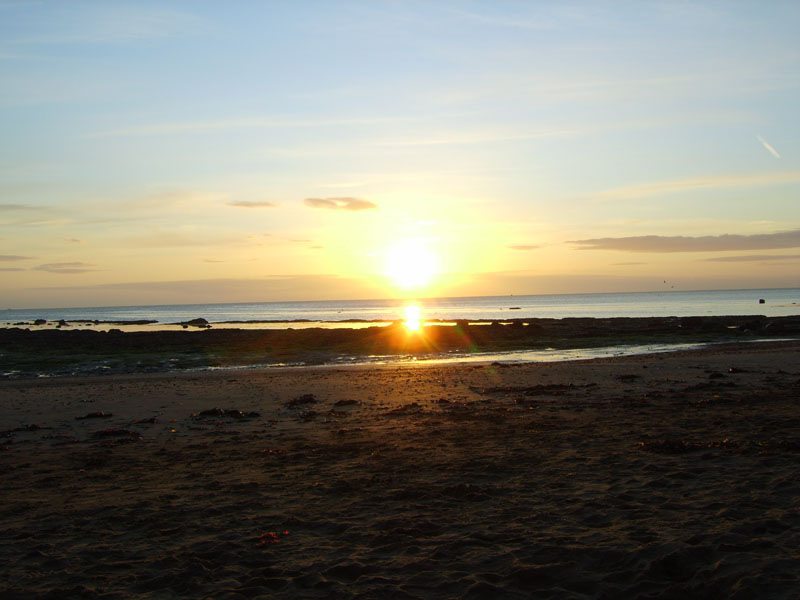 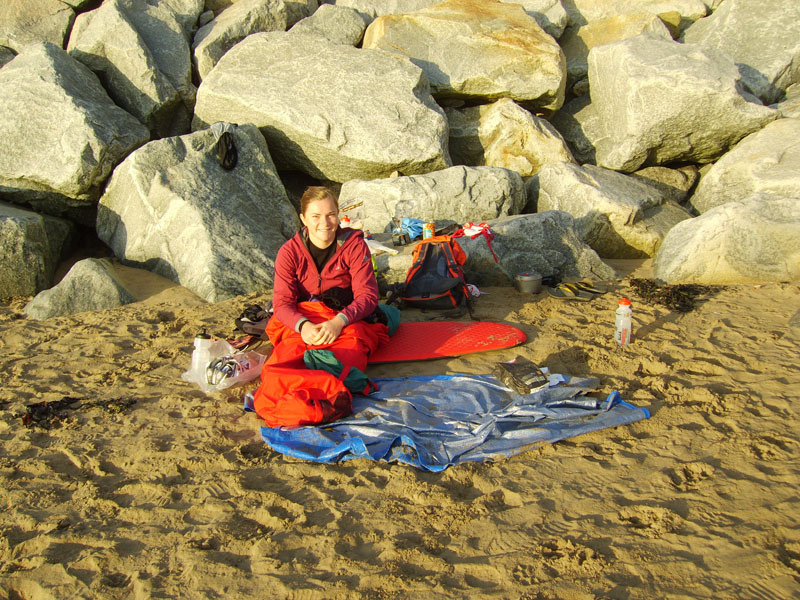 This day’s cycle proved to be slightly more eventful when we rounded a hairpin bend and after narrowly missing my partner’s wheel, I promptly accepted an invitation with the tarmac. After Lying in the middle of the road in fits of laughter, the bike was deemed slightly less roadworthy than it was previously now that the front wheel was seemingly unattached from the rest of the bike. 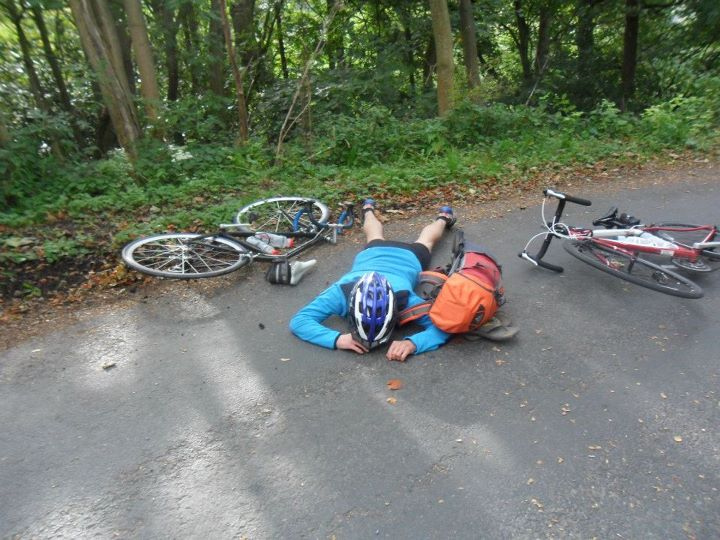 Eventually however, we made it to York, and boarded a train to Grantham where our two seats were swiftly turned into a mini bivvi complete with two damp but cosy sleeping bags.

The final microadventure was a trip to the Lake District with the aim of doing the final pieces of training I will need for Baruntse. This included running up Scafell Pike, England’s Highest Mountain in 56 mins 38 seconds; a climb of Great Gable which ended as a night hike with the last few hours being in complete darkness; a few days with a fully ladened 70L rucksack; and a few extremely ‘mini’ swims in Wastwater. This trip provided the much needed exposure with a heavy rucksack which is absolutely critical when going to high altitude, and also gave a gentle warm up to hill climbing, where the next hill will be significantly larger. Aptly, this microadventure was spent sleeping in a car for 4 nights. Those 4 nights were among the most uncomfortable nights I have ever experienced which was a fitting end to the microadventure series. 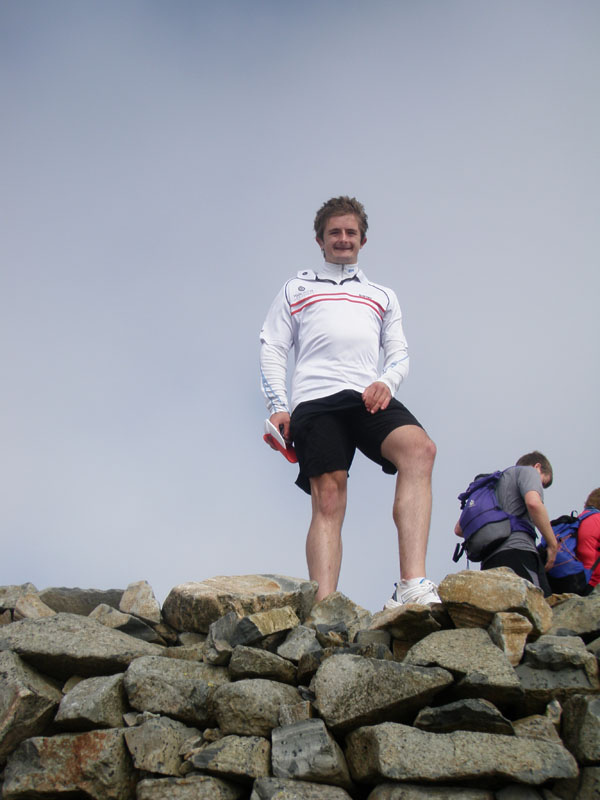 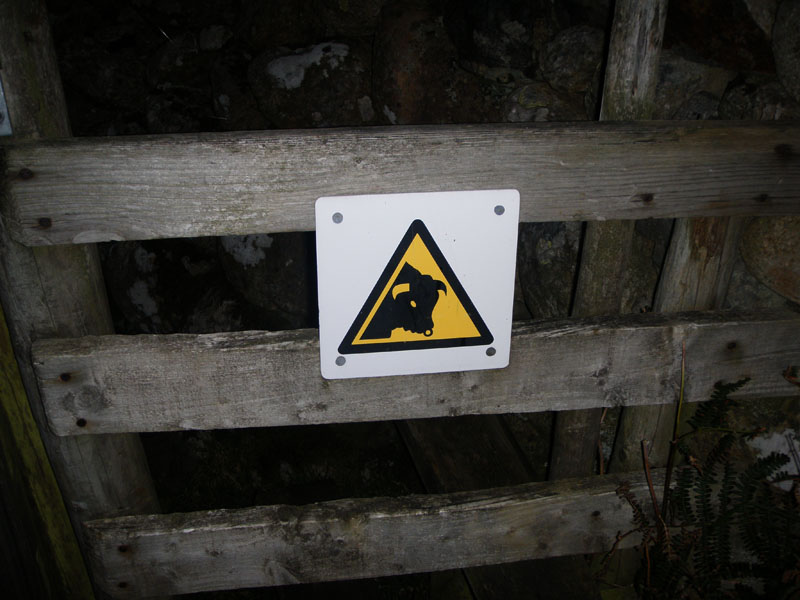 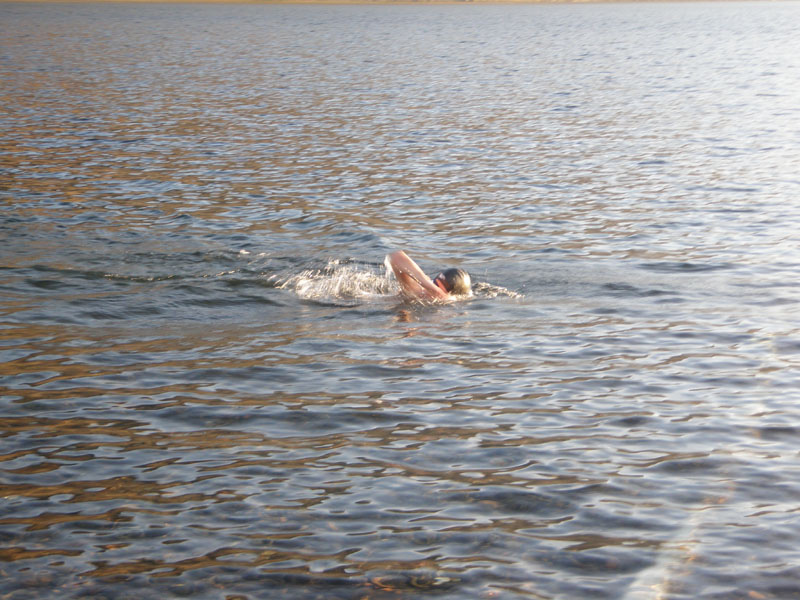 With 3 microadventures down, there was a challenge that I had been mulling over which would act as a transition from my training into the expedition, and also as test of everything I had been working for. The challenge in question was to wake up, and start cycling a 25 mile loop at around 8:30am, then keep going and repeat until I ran out of light, or physically couldn’t go any further.

Having toyed with the idea, I came to the conclusion that it was the perfect test to both my mental and physical endurance. Upon waking up on the morning of the 4th October, I realised it was the perfect day for sailing, windsurfing, kiting or generating electricity from your offshore eco friendly wind farm. Not the best day for cycling. Determined not to be beaten by the weather however, I set off and battled for around 9 hours cycling time. At around 7:00pm and in relative darkness, I returned home having clocked up 150 miles. Pleasingly, I had lasted until darkness; however the challenge was utterly brutal. Physically I was in pain, however mentally, the cycle was torture. I cycled the same 25 mile circuit 6 times to achieve the distance which was a constant torment after going past the 100 mile mark. After, there was just a feeling of utter relief, and a great feeling of pride, just as in all the successful microadventures. An appropriate transition to the Baruntse expedition.

These microadventures were the perfect bridge between the daily training and the application of training. As for my regular training, aside from long runs and cycles, I have developed a seemingly healthy obsession for swimming. I apologise in advance for the following je ne sais quoi of science. A focus of my degree was on physiological adaptations of the pulmonary system which is currently a leading field of research in sports science. Many people assume that the lungs adapt to sport, but this in fact appears not to be the case. Four areas of the lungs; the diffusion distance, diffusion area, pulmonary capillary volume, and the lung capacity appear to remain unchanged during training, i.e. no exercise-induced adaptation occurs in the lungs. This has been found to be the case in many studies of full body endurance training such as running, including a study by Robinson et al. (1982) (http://www.ncbi.nlm.nih.gov/pubmed/7107452). There is however one exception which is documented by Clanton et al. (1987) (http://www.ncbi.nlm.nih.gov/pubmed/3558196) and Mickleborough et al. (2008) (http://www.ncbi.nlm.nih.gov/pubmed/18478253) who both found that swimming training increases vital capacity and total lung capacity. Swimming is the only exception to the rule where genetic endowment usually accounts for large lung capacities. Swimming works to achieve these results through the hypothesis of water pressure on the body, and the regulated breathing. It is not a new phenomenon however for swimming to be used specifically for altitude training, as Bear Grylls writes in his book Facing Up (2000) of a training programme inclusive of swimming repetitive underwater lengths. This is known as apnea training, and has been studied by Lemaître et al. (2010) (http://www.ncbi.nlm.nih.gov/pubmed/19850416). Apnea training hence consisted of a large part of my preparation for my next expedition, which I hope will alleviate at least some of the agony of essentially not being able to breathe and becoming mildly hypoxic experienced whilst on Peak Lenin.

With the exception of perhaps one more swimming session, my training for Baruntse has come to a close, and I can safely say that I have done all I can to be mentally and physically prepared for the upcoming challenge. I fully expect this to be the toughest challenge I have ever faced, and just hope I can do all those who have supported me so far on my journey proud.

I am raising awareness for Climate Unchange, so please check out the work that they are doing. Equally, I am raising funds for Global Angles, so please consider a small donation in their effort to help make the world a kinder place for children all round the world. 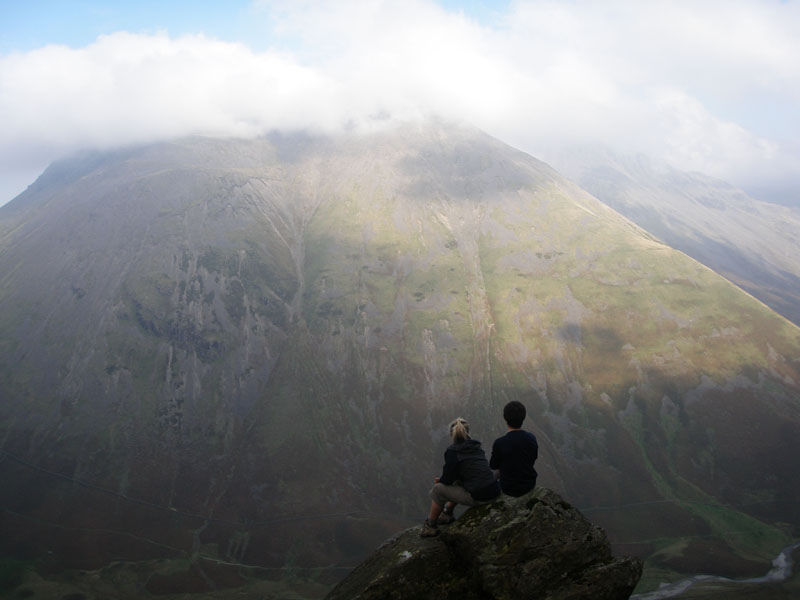